I'm dragging myself around today, travelling from coffee cup to coffee cup.  Last night was our final presentation for a series of Heritage Lectures at our local centre for the arts.  I have a little project that I spearhead.  It's a park in called BT Corner which commemorates the Beatty family who brought industry in a big way to our little town.  As part of our lecture series I presented on the park specifically and making heritage interesting and accessible in general. 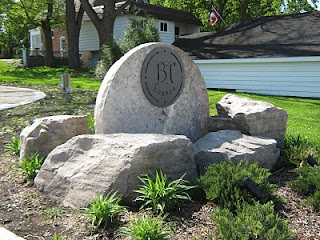 This is the entry to the park - seen on this blog several times before.  Here's a little about the materials used and why.  The replica grist millstone pays homage to the very first industries in town.  Mills were the cornerstone of our community and without them and the agricultural landscape surrounding Fergus, the Beatty Brohters would never have come here.  The limestone boulders surrounding the millstone represent the building material of choice for buildings in this area.  The sandblasted stainless steel sign bearing the BT logo reminds us of the Beatty foundry which was located in the building directly across the street from the sign. 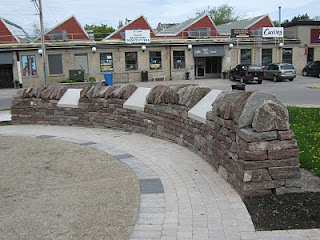 You can see the factory attached to the foundry in this picture.  The factory found reuse as the Fergus Market for many years before having a makeover five years ago and become the more upscale, Fergus Marketplace.  In the foreground is a dry stone wall which highlights the Scottish roots of the town.  It will house the interpretive panels.  It looks really, really nice. 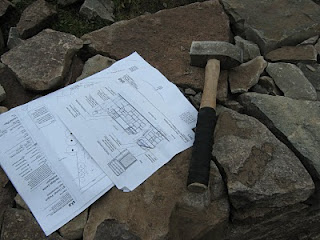 And finally here's just a really nice shot of the stonecutter's hammer and the design drawings sitting on the wall as it was being built.

The lecture series seems to have been a success.  Turnouts were good, though I suppose you always wish there we more folks in the seats.

When I wasn't presenting, I had the pleasure of sitting with local actor, Colin Fox.  We spoke a bit and he seems a delightful man with a genuine concern for the heritage of his community.  We'd met briefly before at the Elora Writer's Festival and I've had occasion to bump into him at events around town.  I needed to tell him that he has thrilled my kids with his work on the animated tv show, Atomic Betty.

Work on Gerry has slowed as I find myself needing a little extra polish on Loremaster.  More on that as things develop.
Posted by Dave Beynon at 09:35 No comments:

I think that I shall never see...

Today I unexpectedly found myself writing a poem.

Over the last few weeks I've been plugging away at Gerry, my kid's story about an orphaned giant.  Each day I've become a little more immersed in Gerry's world and things are flowing nicely.  Today, however, I opened my notebook to where I left off Gerry last night, tapped the page a few times with my pen, then leafed ahead a dozen pages to a blank sheet.

I wrote these words:

And then the first three verses of a poem bled out of my pen onto the paper.  I'm heading back to my notebook now.
Posted by Dave Beynon at 09:45 No comments: