Herne revisited - and a word on multitasking

Yesterday I spent a bit of time on Edgeling 2, but found my thoughts drifting to the manuscript for Herne sitting on the rocking chair next to me.  I had done some rough edits about a month ago, but hadn't really looked at it since.  Well, before I knew it, I was re-reading the manuscript and making some mental notes.

So far today I've written about a page more of Edgeling 2, but then I opened Herne on the other computer and have been flitting between the two.  Herne has so far won the contest for my attention today.

To inspire me while cleaning and polishing Herne, I decided to look for some images of the old antlered guy himself and found this: 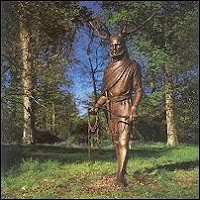 This is a bigger than life (7ft 7 inches) sculpture of Herne by artist Michael Rizzello.  Here's the link to the website.

As I flit from computer to computer I am reminded of a conversation I had with the kids at dinner last night about the concept of multitasking.

My daughter had heard the term and asked me what it meant.  I told her that it refers to a computer's ability to run several programs at once.  She said she'd heard it used to relate to people.

Ahhhh.  Now, I hate the term "multitasking" to be used to describe human behaviour.  I know that more and employers say they're looking for individuals who can multitask, but it is my firm belief that if you want to do something well you need focus.  I told my daughter that it is possible to multitask.  We all do it when we drive and listen to the radio, but at least one of those activities is virtually unconscious.  I'll let you decide which.

Human multitasking is, in my opinion, one of the big things wrong with the way we work nowadays.  If you want a lot of things done in a mediocre or poor fashion, go ahead and try to multitask all you want, but if you want a decent product or result there's no substitute for focus and attention to detail.  Many people brag about being able to do several things at once, but is doing many things poorly really something to be proud of?

I am not saying that everything you do needs to be your best effort.  No - far from it.  In fact, there are many things in life where it makes sense to put in the least effort required to get the job done.  "Any job doing is worth doing right!"  Maybe, but not all jobs (or even most jobs) demand excellence.  There are some jobs that simply do not merit one's best effort, but for those things that are important, people do themselves a disservice to tackle them with a lack of focus,   And multitasking - for humans - always equals a lack of focus.

Here endeth the lecture.
Posted by Dave Beynon at 11:15 No comments:

For three of the last four years I  have spent Labour Day weekend cooped up in my basement office, scribbling away in my best attempt to write a short novel in only 72 hours.  Each time I've done it, I have been pleased with the result and this year was no different.

In 2006, I wrote a story called The Platinum Ticket.  It was a story about time travel, alien viruses, environmental issues and even Adolf Hitler thrown in for a little bit of fun.

In 2007, I wrote a story called Patriot.  Patriot is a story about a Paraguayan dictator who faces his last 72 hours before execution.  I am currently trying to flesh out Patriot to novel length.

In 2008, for a variety of reasons, I decided to take a year off from the contest.

Last year, in 2009, I wrote a story called Herne.  Herne  is the tale of an Ontario Conservation Officer who encounters a mythical antlered man in the wilds of Quetico Provincial Park.

Well, once again the winners have been announced and I am disappointed to say that I did not win the 32nd Annual Three-Day Novel Contest.  Once again, I was not even shortlisted.  Once again, I'm not surprised.

Over the last couple of years I have watched the Three-Day Novel Contest competition on Book Television. During the competition the writers are judged by Canadian authors ( usually from Edmonton) and contest officials.  There are often comments such as, "This opening is just the kind of opening you expect to see in a Three-Day Novel." or "This prose just doesn't read like a Three-Day Novel."  If this sort of sentiment is indicative of the attitudes of the judges of the Three-Day Novel Contest and your effort doesn't match a preconceived notion or template, then finding the winner's circle will be difficult to say the least.

But don't get me wrong, I have no sour grapes here.  The Three-Day Novel Contest has, over three of the last four years, been a generator for three solid pieces of mid-length fiction for me.

Was I disappointed?  In previous years, yes.  This year was different, however.  This year my goal was to get the framework of a story that had been rattling around in my head down on paper.  I achieved that goal in spades.

Now comes the hard part.  Now I have to clean up and polish Herne and send it out into the world for publication.
Posted by Dave Beynon at 09:46 No comments:

A little older and a little wiser...I hope.

On Saturday I turned 43.

As I've said before, since I have a January birthday, the New Year's resolutions come into play at that time.  It has thus been a very busy day for me.  After a morning workout, during which I admittedly overdid it, I headed straight into my basement office to get to work on The Edgeling 2.  I've had a successful day, both in quality and quantity.

As I was heading down to my office, my lovely wife said to me, "Have you been using your Dragon NaturallySpeaking program?"  I told her that I hadn't, not lately.  She suggested that maybe I should.  Although I didn't use the speech recognition software while I was writing today, I think I will tomorrow.  This blog entry has been composed entirely ( with the exception of "The Edgeling 2", which it doesn't recognize) through the spoken word.  It is astounding how fast the words find their way onto the page when you don't have to type the damn things.

The celebration of my birthday included an amazing lunch of All-You-Can-Eat Sushi at a place called, curiously enough, Hockey Sushi.  Don't let the name fool you.  For an all-you-can-eat place, Hockey Sushi serves up some excellent fare.  During the drive to and from lunch, the family had an opportunity to talk about our upcoming trip to the United Kingdom.  We discussed all of the different things we hope to see during our short two week vacation there.  I'll share more details in future updates.

Another item of note - on my birthday it was so mild that when we got home from lunch the children asked if we could go for a bike ride.  A bike ride on January 23rd?

How on earth could you ever say no to that?
Posted by Dave Beynon at 14:37 No comments: