Space...that's what we're looking for and, for the Beynon family, space will come in the form of a garage.

Right now we have a carport.  The carport has served us well over the years but despite our best efforts to weatherize part of it for the winter, it remains chiefly a three season structure.  A couple of canvas dividers work in a pinch, but it's still damn cold and damned drafty out there, even during the mildest of winters.

We've talked about extra space for a couple of years now and we've bandied about several ideas.  Here's the one we've decided to work with:

This is rough sketch.  What we want is space inside of one car, a workshop area that can store bikes and sleds at the front and gardening stuff at the back with a workshop in the middle.  We also want an office that will have a futon or a Murphy bed for when we have guests. 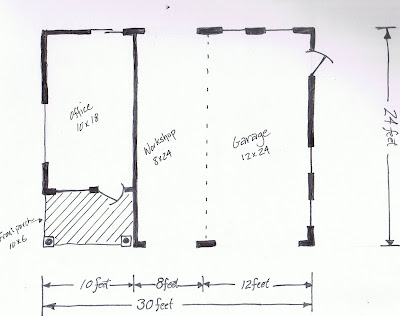 We met with a construction guy (just happens to be called Dave) who lives in town and has done work locally.  A couple of years ago he built what has become known in these parts as "The Garage Mahal "  I have spoken to the folks who had the Garage Mahal built and they sang Dave's praises.  We went over our ideas and spoke about permits, timing etc.  The ball is in Dave's court for the next few days.  It promises to be exciting times around here as we move forward.

I'll keep you posted on developments.