Saw something in my travels recently that sent the line above from the Robert Frost poem, Mending Wall, straight through my mind.

While not strictly adhering to the definition of passive-aggressive behaviour, this comes pretty damn close: 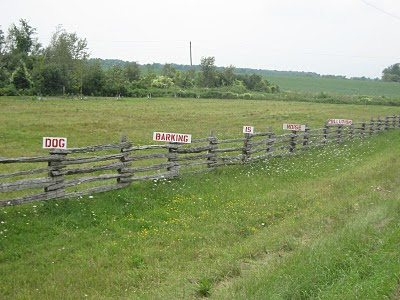 I promised to speak to my reading habits and I will, but first I want to write about a family trip to the Stratford Festival.

We are fortunate to have world class theatre only forty-five minutes down the road.  Every year the Stratford Festival puts on some of the best live performances to be found anywhere.  In the spring, while looking at their website, I couldn't believe my eyes.  My second favourite play, The Tempest, was on the playbill.  Not only that, but in the starring roll - Christopher Plummer.  I've seen Christopher Plummer before, 20 years ago in Macbeth. I knew we'd have to go.  Fortunately for the kids we were able to arrange 2 shows on the day we went.  The second was a stellar adaptation of Peter Pan.  In both shows, the acting and the spectacle combined to give me the most satisfying live theatre experiences I've ever had.  Just magic.

Let's see - what else?  The second Loremaster book plods forward, getting a little more robust every time I can steal a few minutes to work on it.  I am now also working on a vampire short story.

Reading habits...  I was prompted to talk a little about my reading habits after I made an observation a few weeks ago.  I always have at least a half-dozen books on the go at any time.  Currently I am reading Spider Robinson, Robert J. Sawyer, Christopher Moore and selections from three anthologies.  And that's only the fiction.  I'm flighty when I read.  I jump from book to book.  It's not that I get bored with what I'm reading.  I usually don't.  But I'm not the sort of person who can sit and read from cover to cover uninterrupted.

Here's the observation I made a few weeks ago.  There is one - and only one I've found so far - author who corrals me in for the duration.  Kurt Vonnegut.  I was reading God Bless you, Dr. Kevorkian - granted a short book - when it dawned on me - I just read this guy in one sitting without the need to read something else.  I decided to see if  Spider Robinson had the same effect.  Although I like Spider's writing a lot, no such luck.  What is it about Vonnegut?  What does he give me that no one else ever has?

I think Vonnegut gives me at least one new or irreverent or painfully true idea on every single page.  He masterfully takes these many new, irreverent truths over the course of each book and binds them together into a story that leaves me thinking and laughing long after I close the book.

That's what I think, anyway.
Posted by Dave Beynon at 10:32 No comments: