This happens this evening: 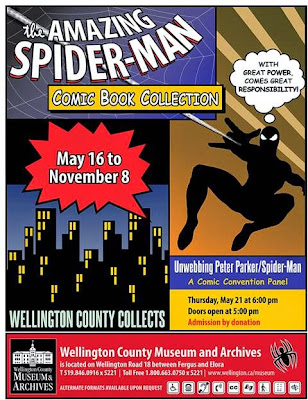 I had the opportunity to get a sneak peek at the exhibit last Friday.  The exhibit features gems from a mysterious unnamed local collector who, I believe, has a copy of every issue of Amazing Spider-Man ever published.  The crown jewel, I think, is the Amazing Spider-Man #1 signed by Stan Lee.

I am part of the panel that will speak tonight.  I bring only my expertise as a person who collected many titles avidly for a span of about 20 years.  I will also speak about Spider-Man as literature, focusing on a story line from 1987 written by J.M. DeMantteis and penciled by Mike Zeck.  KRAVEN'S LAST HUNT was a six part story spanning the three existing Spider-Man titles that ushered in an age when Spider-Man stories became amazing again.

Tonight is made even more special by the inclusion in the panel of my old high school chum, Stuart Immonen.  Stuart is the penciler for any number of DC and Marvel titles, as well as producing his own graphic novels with his wife Kathryn.  I'm very much looking forward to catching up with him today.