Work has been starting to gear up. More and more clients coming in - more and more projects on the go. I wanted to talk about a little work related function I attended on Friday which I greatly enjoyed and was for a very good cause. The charity is Hockey for the Homeless and before you ask, "They're homeless - don't they have bigger problems than renting ice time?" I'll tell you - it all about a bunch of rich guys who get together to play some hockey and raise money and awareness for homelessness.

The one day event I attended made approximately $130,000 that will go toward Survival Kits (a duffel bag filled with things like sleeping bags, toiletries, some food items, clothing, candles etc) and various relief agencies in the Greater Toronto Area. The charity has about an 85% throughput so donations aren't going into huge administration. I encourage you to follow the link and check them out. 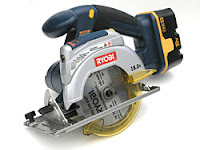 While at the event I made some bids on some silent auction items - more to run up the bids than to actually win. I bid on this Ryobi One+ system of 18 volt power tools - again, trying to run up the bids. Well, at the end of the night I won the set for $ 125.00 (it's actually worth about $390.00). 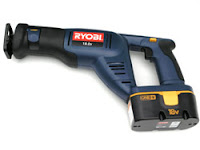 I took home my prize and the next morning my 4 year old son looked at the set with awe - the power tool gene is firmly planted on the y-chromosome, I'm convinced - and asked how soon he can use the reciprocating saw. My six year old daughter took one look at the set and said, "That's very nice, Daddy. I'm pleased for you. Now, I guess there's no excuse for you not to finish the doll house you started for my Polly Pockets." I've got some work to do, I suppose...

In the writing world I'm starting to find something like a routine. Small Town Secrets is in the process of being very much rewritten into a much better story. Notes on the Platinum Ticket and plans for fleshing it out continue. Over Christmas (hey, it's a comin') I am planning to begin an overhaul on Loremaster and finally submit it.

I also have a number of new ideas germinating and I am scribbling outlines and ideas as they come. All that and a doll house to build, too! Ambitious plans to be sure and we'll see where those plans take me...
Posted by Dave Beynon at 12:36 No comments: