Sorry for the delay.  I know last time I promised details the following day, but we kind of got busy with the rest of the vacation.

Here's a little something from the Pratchett Prize evening.  It was a great time.  The judges said it was a difficult choice and one that was not actually finalized until the day of the award.  In the end there were two winners.

Pictured here are Michael Logan, Sir Terry Pratchett and David Logan.  Here's an article from the Guardian that talks about the award.

Before the award my family and I spent some time with Michael and Natalie, his wife.  He's a great guy and if I couldn't win, I'm glad it was him.  We compared notes about what being shortlisted meant to us, nervousness leading up to the award and how much we both love telling stories. 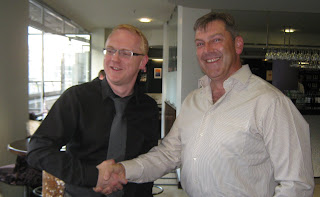 I'll have a more detailed account of my conversations with Marianne Velmans, publishing director of Doubleday UK and of course with Sir Terry, but I'll save that until I get some accompanying photos from my cousin Sara.


After the award, the kids were starving (they didn't think much of the trays circulating at the awards which weren't much geared to a child's palette).  Here were are at a nearby restaurant: 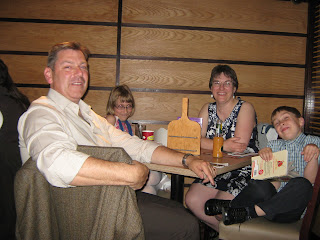 Oh, and look over there across the way.  There's my aunt, uncle, cousin and her son: 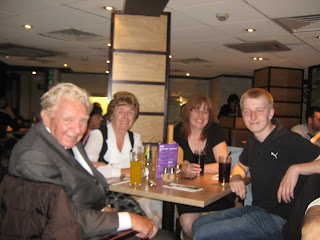 After the meal, the kids were thrilled to find this: 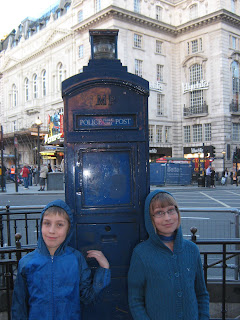 Will you look at that - a mini-TARDIS in the heart of London!
Posted by Dave Beynon at 06:12 No comments: