The family, still bleary and suffering from travel and jet lag from our trip to Hawai'i (I may post something about that later) made our weary way to FanExpo on Sunday.  It was a day of long lines, huge crowds, celebrities and wall to wall merchandise.  My daughter sported a steampunk outfit she made herself and my son wore a jumpsuit from the video game Fallout 3.  My wife and I opted for the "tired parent in tow" costume that seemed popular this year. 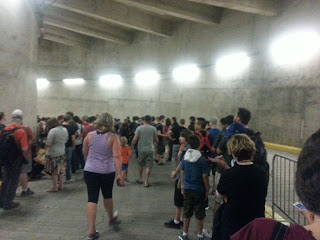 Here's everyone being patient while the line crawls forward. 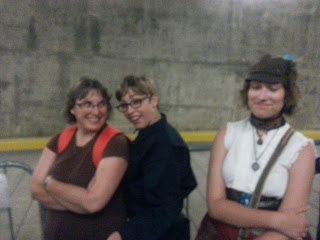 The great irony of this particular show is that most of it is held in what basically amounts to the world's largest basement.

There was a lot of cosplay going on and when I've gone in previous years, there was a lot of steampunk.  This year - not so much.  It looks like anime and gaming were well represented, as were comics.  There were more Castiels (from the TV show, Supernatural) than you could shake a stick at.

There was also a cadre of Daleks. 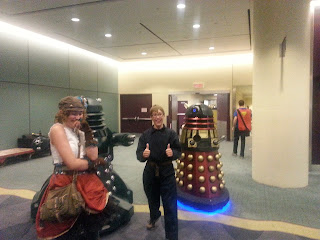 The Red Dalek was wonderful, telling my daughter, "No need to be nervous, Human.  Regardless of your emotional state you shall still be exterminated!"

It was, of course, crowded. 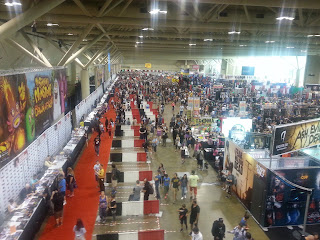 I've been to FanExpo before and knew what to expect.  My family, I think, were a little overwhelmed by the shear volume of people.  They were also impressed by the variety and (sometimes) quality of the convention's guests. 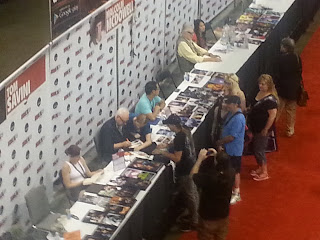 Speaking of quality guests, we attended Q&A with both Gillian Anderson of X-Files fame and Hayley Atwell, star of Agent Carter.  As the dad of a 14 year old girl and a 12 year old boy, I think it's a good idea for them both to see capable, independent women who play capable, independent roles.

My daughter and I attended a panel that featured authors who belong to the Horror Writers' Association, Ontario Chapter.  The panel's title was "What's the next big thing in horror fiction?"  I know one of the panelists and recognized the names of a few others.  In all, the panel was a disappointment.  Almost from the start, the seven fiction writers (most of whom had books they were trying to promote) ignored the written word.  The discussion lead invariably to movies and film.  Example that could easily have been made citing books and short stories were made through references to movies and video games.  At one point, the moderator got onto the subject of desensitization and immediately spoke about a YouTube video that depicted a beheading.  From that point forward the moderator seemed obsessed with the subject of snuff films, returning to it so often that members of the audience began to leave and members of the panel looked increasingly uncomfortable.  Eventually - I think audience questions finally got the panel onto the subject of the horror fiction - there was some talk of Stephen King's recent crime fiction but the panel never really delivered on its promised subject matter.

Fortunately the panel experience didn't sour my daughter's day.  She and her brother had a great time, entirely enjoying spotting particularly well pulled off homemade costumes.  The best of the day was a Sharknado costume made from wire, cotton batten and toy sharks that lit up from the inside.  Totally inspired.

FanExpo IS wall to wall geek and yes, a goodly number of the people there have poor hygiene and even poorer social skills but anything that can draw together so many people with shared interests in a safe environment for mutual enjoyment can only be a good thing.

God help me, we'll likely attend next year too...