What seems like a lifetime ago now, I promised to talk about doing something that I didn’t imagine I’d enjoy.  Like the bullfighting post from a while back, I ended up with a new appreciation that came about simply from jumping at a new experience.

It’s important to repeat my lifelong friend, Ann Swallow’s words at this point:

“You have the chance to do something you've never done before. Put on your best pair of shoes, grin, and go! This applies to just about everything.”

A year or two ago I was introduced to an Irishman and, since he’s Irish, let’s call him…oh, I don’t know…Pat.  Pat is an incredibly likable man.  Smart, witty, funny …and a competitive international shooter.

Since the current novel I’m writing has a goodly number of folks with handguns, I thought I’d bend Pat’s ear regarding firearms.

“Have you ever fired a gun?” he asked.

I explained that I grew up on a farm.  I’d fired a .22 rifle often, a neighbour’s 30.06 maybe three times and a shotgun a half dozen times at most.

“Ever fired a handgun?”

I had to admit I hadn’t.

I’ve always been of the opinion that handguns have one use only – killing people.  I’ve never understood the allure of the handgun enthusiast.  Canada lacks the “right to bear arms” thinking (for the most part) of our neighbours to the south, so there’s no Constitutional imperative for me to desire a gun to protect myself from King George III.  Firing a handgun has never even been on my radar as a thing I’d like to do someday, but if I was going to be writing a fair deal about people handling guns and an opportunity presented itself for some firsthand research, I’d be a fool to say no.

About two weeks later we travelled to a nearby rural gun club where Pat is a member.  Throughout the drive, Pat drilled me on safety.  Pat’s guns were each locked in its own separate container.  Each sported a locked trigger guard.  The ammo was in a separate locked box and all of these items were in a wire-reinforced carrying bag that was – you got it – locked.

When we got to the club I was expected yahoos and hillbillies.  The first person I was introduced to was the range captain.  He had long, scruffy hair, two days of beard and horrible, horrible teeth.  He looked just like someone who might wander into your camp while you’re on a white water rafting trip down the .  As soon as he spoke, my prejudice fled.  The range captain (Dan, I think) was articulate and businesslike.  As a guest on the range, Pat was responsible for my behaviour and as range captain, he was responsible for my safety.   He watched like an eagle as Pat taught me all of the rules of the range, what the flags meant and what to do when the range light was on.  Only after I was familiar with the rules that would keep me safe and, one hopes, alive, was I permitted to actually enter the shooting range.

There was a long hallway with stalls facing the open-air range.  There were lines painted on the floors and god help you if you cross one line or the other depending on the colour of the light that happens to be on.

Pat took us to a vacant stall three from the end where we waited to be “green-lighted” to enter the range and place our target.  Twenty five yards doesn’t seem like far, but when you’re aiming with a handgun at a torso-sized cut-out of corrugated paperboard (B flute – feels like a 150lb test) it seems a long way indeed. 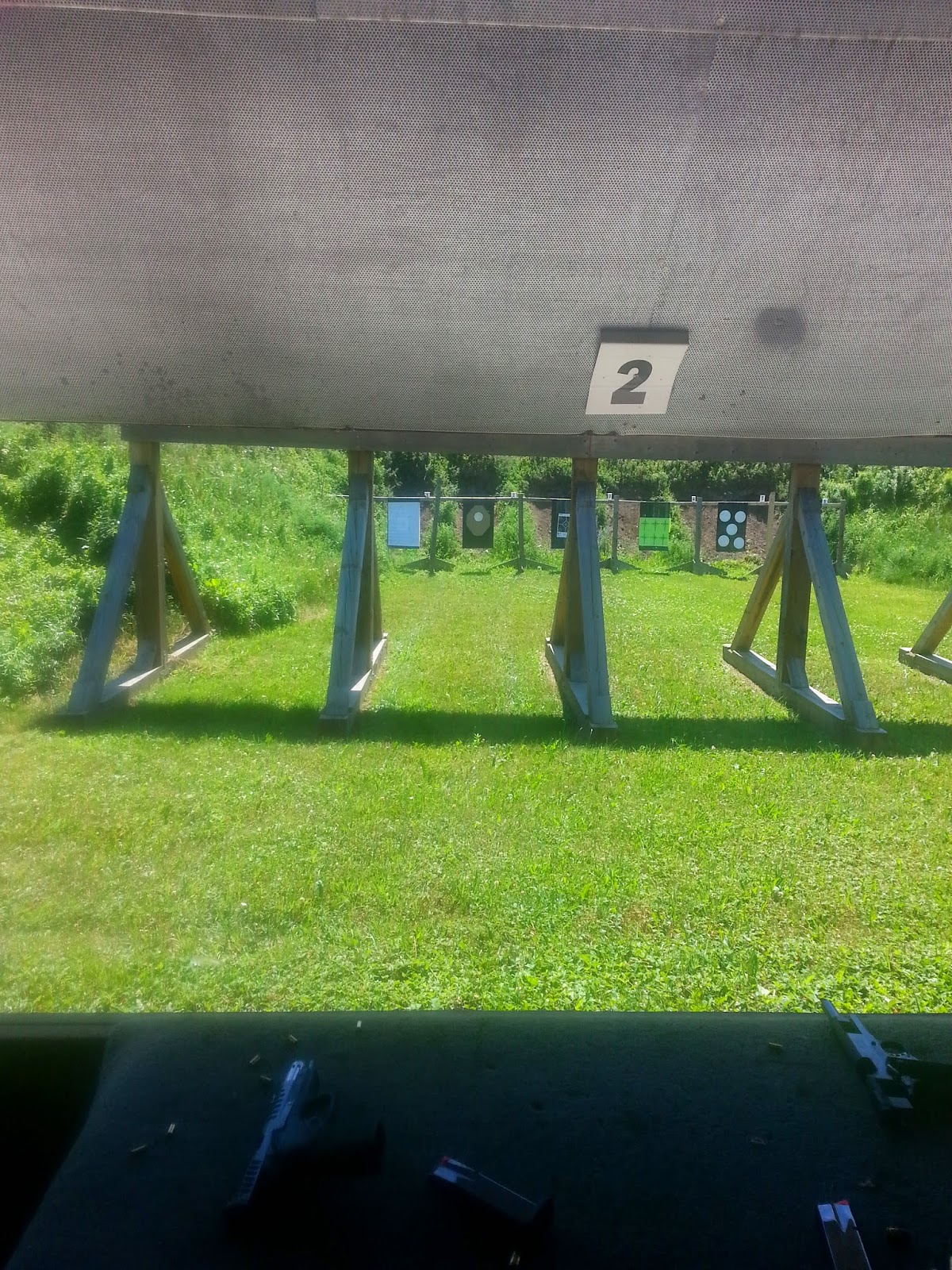 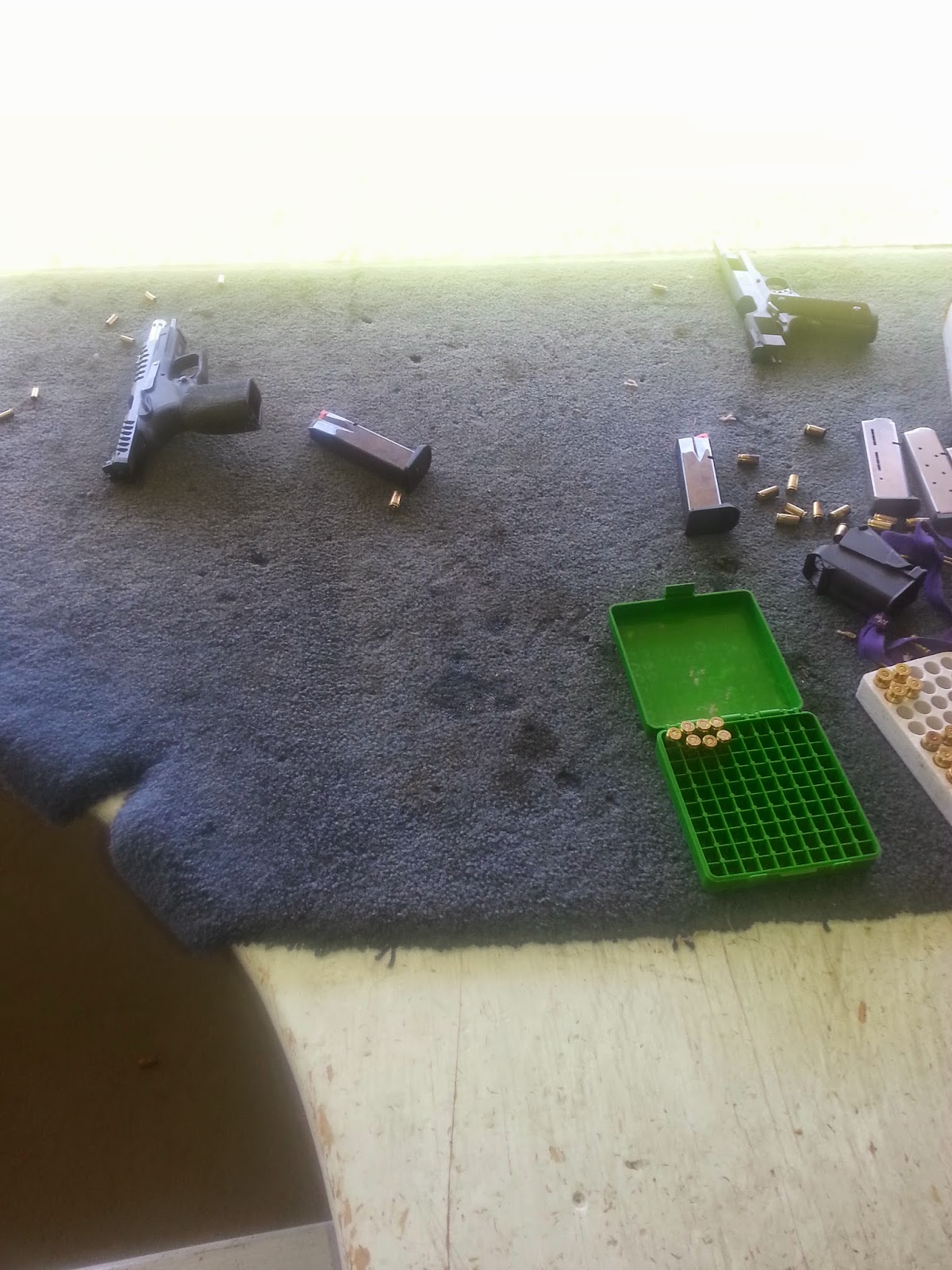 With our target placed, we waited for a different light, then were allowed to take our place within the stall and begin handling Pat’s guns and ammunition.
The first thing Pat told me was the gun ALWAYS points down range.

Pat next told me that you must always load your own gun.  This meant that Pat had to teach me how to load the magazine and then he showed me the proper way to insert the clip and chamber the first round.

Lots of rules, many I’ve forgotten but the biggie is this:  ALWAYS assume any gun is loaded with a round chambered and that the safety is off until you know for certain otherwise. 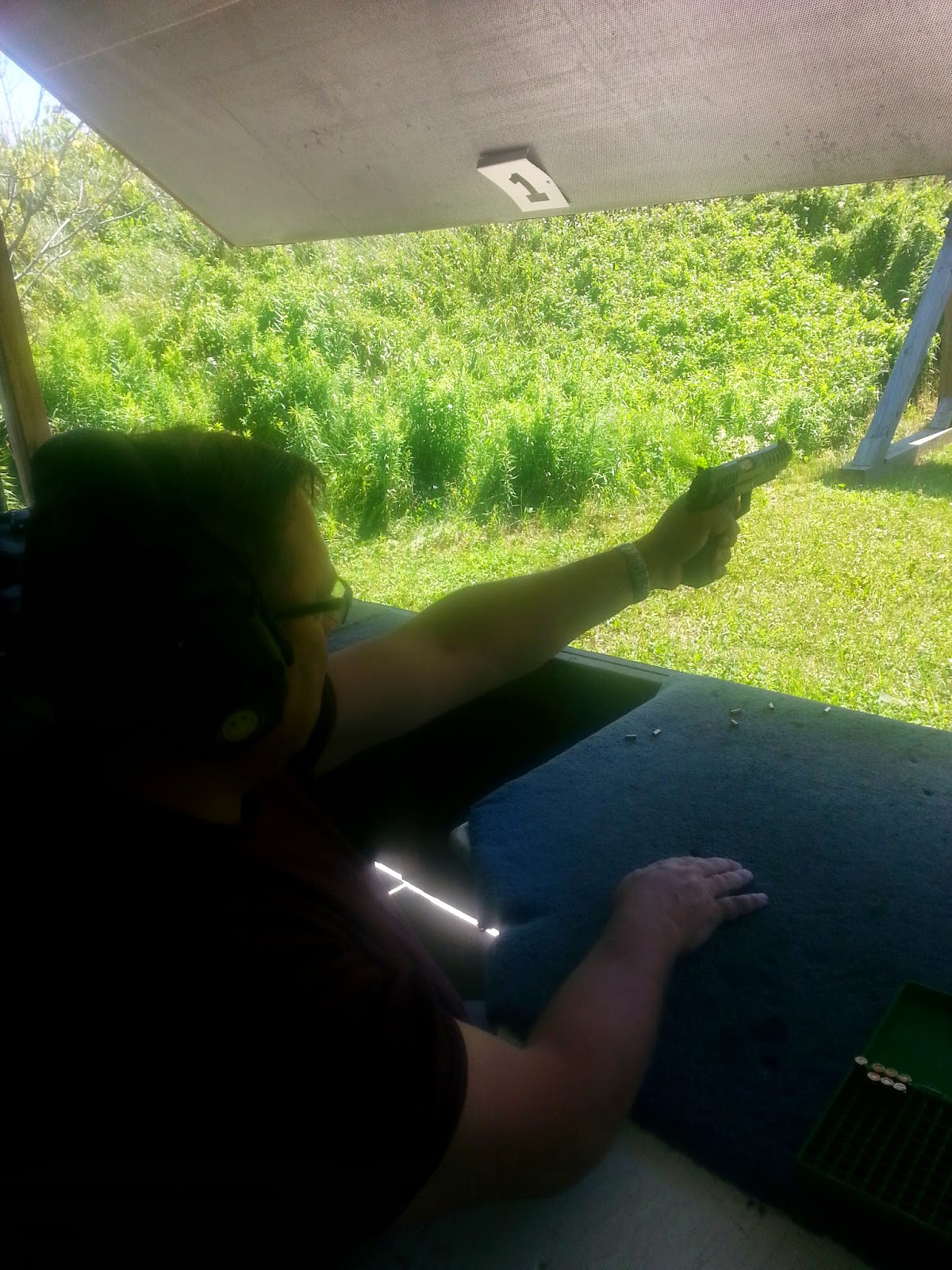 Once I was safe and schooled, we turned to the shootin’.  I shot sitting.  I shot standing.  I shot two-handed and one handed.  Pat let me shoot his 9mm and his .45.  For a guy who has never had any interest in handguns, I sure went through a significant number of Pat’s ammo that afternoon. 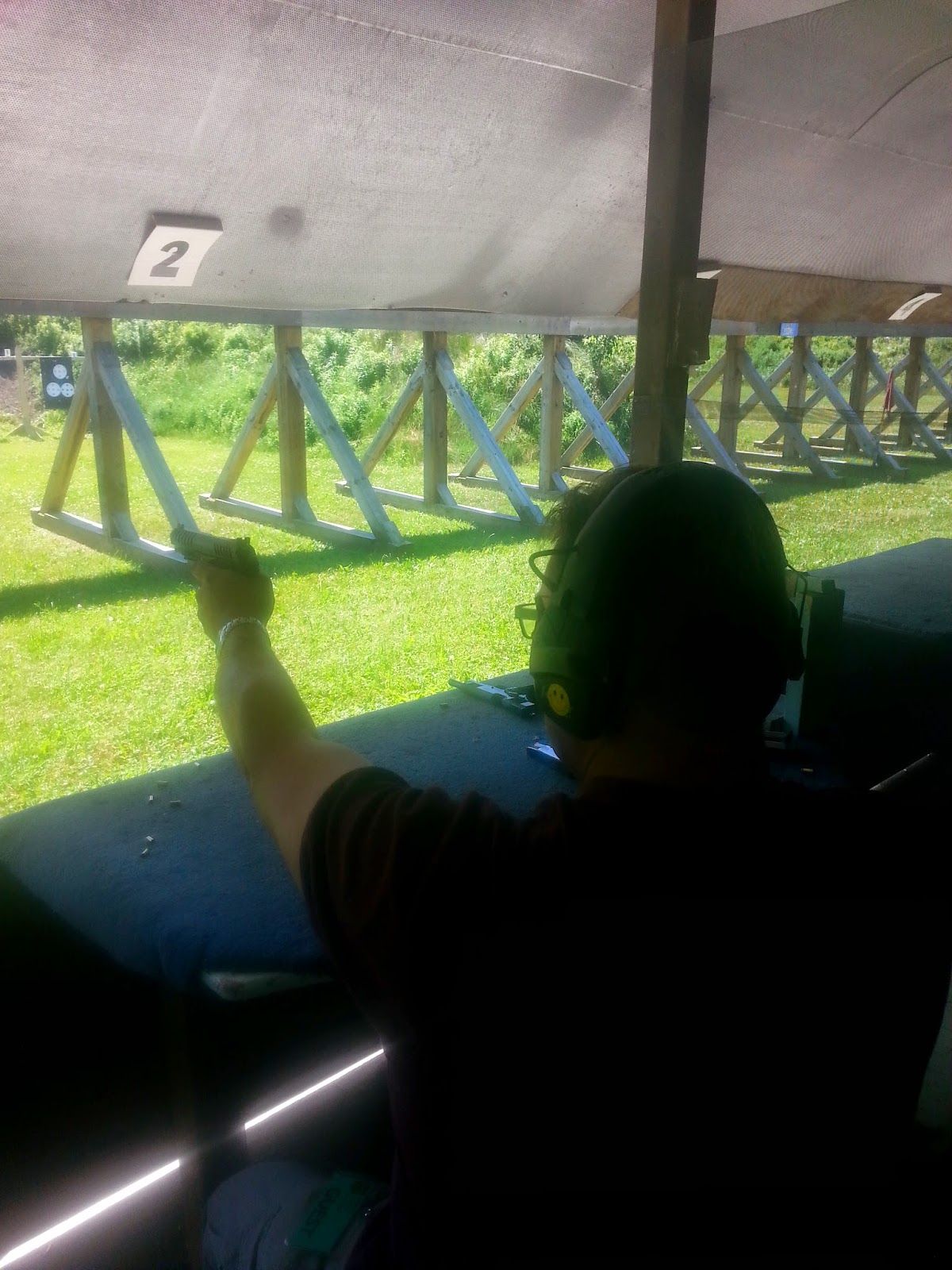 When we weren’t shooting, we watched other people shoot.  My favourite guy was a Serbian-Canadian guy with a vintage Lee-Enfield rifle that sounded like a cannon and a black powder rifle that acted like a cannon.  What a treat it was to watch this man prime his rifle and then the blast of flame and the cloud of thick smoke that accompanied each shot.

There was also a young man and his girlfriend with their civilian assault rifles.  After I asked some questions, the man asked if I’d like to hold his rifle.

“As long as you show me how to handle it safely first,” I said.

Dan, the range captain flashed me a toothy grin.  “Good answer,” he said. 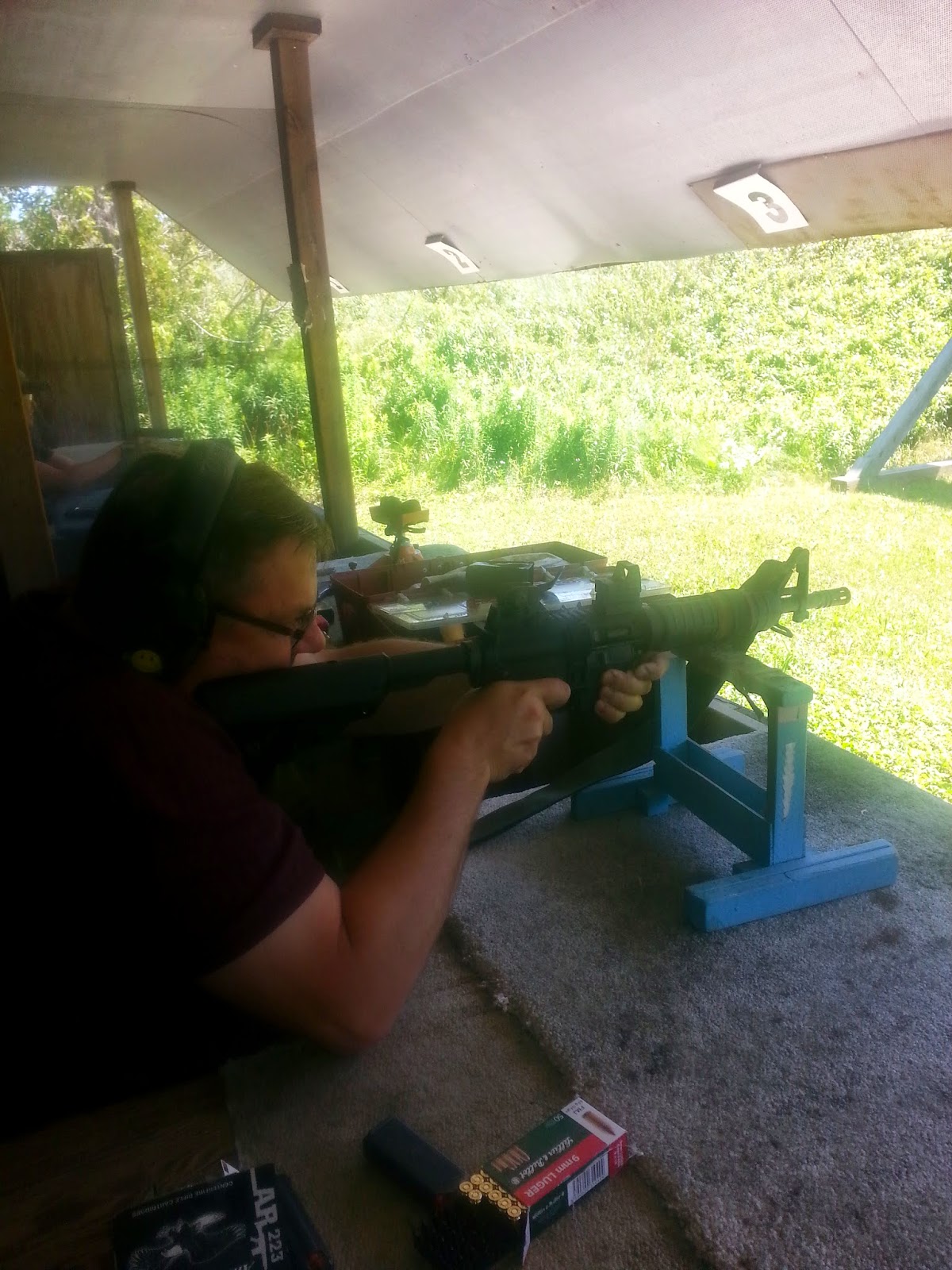 That rifle looks like it ought to be heavy but a lot of the pieces are ceramic or aluminum and the gun is deceptively light.  I tried this gun both standing and sitting and though this target was 50 yards away, I was far, far more accurate with the assault rifle than I was with either handgun.

Pat walked me around the range, showing me the different activities and ranges located on site.  Much to my surprise, I had a lot of fun.

So – am I a gun convert?  Do I want to become a weekend shooting enthusiast?

No, but I’ve come a long way to understanding those that are and do.