The sick things I look at...and a lovely little Corner

I have spent the last couple of days immersing myself in the flu.

All kinds of flu - avian flu, swine flu, horse flu, dog flu - even duck flu.  All of them - potentially the next great pandemic that will shake we humans off the earth's back like so many fleas off a dog.
I have also been going over the numbers for SARS.  All of this is background material as I flesh out Patriot.  SARS appears to have been the global wake-up call for serious pandemic planning and we are seeing the effectiveness of that planning with the handling of the current swine flu outbreak.
The problem is, in Patriot, the world's Pandemic Plans need to fail - and catastrophically so. Hence the research.
Beyond obsessing over horrific respiratory diseases and influenza, it has been a fairly fruitful week.  As I have written before, I am a member of the local heritage committee.  I also chair the BT Corner Sub-committee.
"What's a BT Corner?" you might ask.
This is: 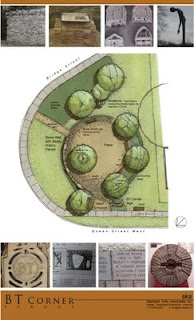 And here it is in three dimensions: 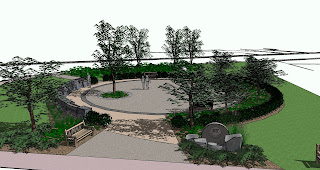 It is a small park that commemorates an industrial and social powerhouse in my community.  In 1874 a pair of brothers came to Fergus and started a machine shop which grew into, at one time, the largest producer of farm implements in the British Empire.  Those brothers were George and Mathew Beatty and their company was Beatty Brothers Limited.
We've been raising funds etc for some time and had a bit of luck last week.  The Grand River Agricultural Society has generously donated $15,000 over the next three years.  Thanks to them, our little commemorative park is a definite go.
Next time I'll add a bit more about the Corner, but for now it's back to the Pandemic...
Posted by Dave Beynon at 23:21 No comments: