The Book of Trades

Each year the Elora Festival holds a massive used book sale during the first weekend of May. It is a fundraiser and a hugely successful one. Even before we called this area home, my wife and I would make the pilgrimage to the Elora Curling Club for the event.
Each year we go (as long as we're in town) and each year we walk away with at least one gem.
one year I found an 1852 History of the World (only the first volume, unfortunately). It was in poor condition but the perspective is amazing. Imagine history told by someone who has yet to see a US Civil War - or a World War. Imagine history before airplanes. Well, I don't have to - I have the book. 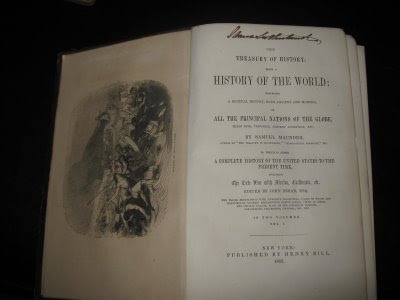 I also have a first printing of Raymond Chandler's The Long Goodbye which I found amid an ocean of crime novels. I'd post a photo of that one too, but I can't find it just now.
My favourite find, by far, is this one: 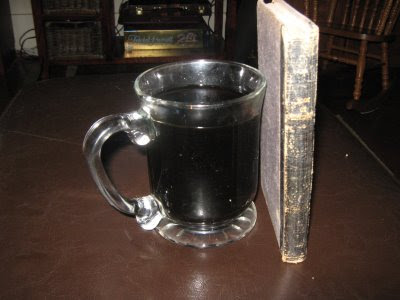 You probably can't read the title on the spine of this little volume. It's called The Book of Trades. I can find no date to tell me just when the good people at Spottiswoode and Co. of London printed this little gem but just look at some of the occupations listed: 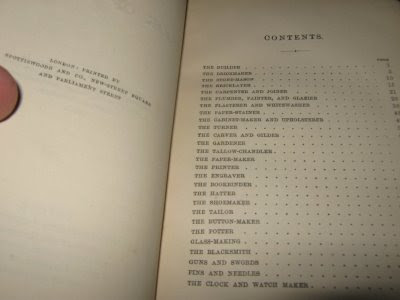 You might not be able to make it out. We have The Paper Stainer, The Tallow-Chandler and the Button Maker, to name only a few. Each occupation has a detailed description of the job, the materials used, the tools of the trade and how to perform the tasks. It is an amazing reference for information that is quickly being forgotten. When was the last time little Billy said he wanted to be a Cooper when he grows up. (The job of Cooper, by the way, is still in demand, though there are only a few master coopers left in the world and not a lot of folks lining up to apprentice in the fine art of barrel making.)
I was referring to The Book of Trades this morning and thought I'd share. I would also encourage you to find your way to the little village of Elora on that first weekend in May and discover a few gems of your own.
Posted by Dave Beynon at 11:47 No comments:

Clearing my head and a really inspired link

Went for a bike-ride today that can only be described as ass-numbing long. One hour and forty-five minutes to the nearby town of Belwood. It was a beautiful day and the trail was free of traffic. Didn't see a soul until about five minutes before I got home. Here - see for yourself: 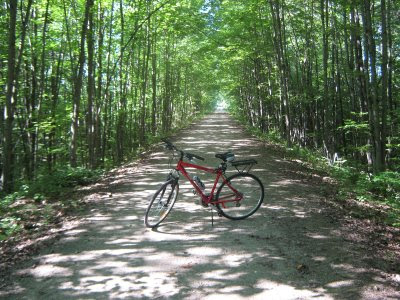 And this is looking the other way: 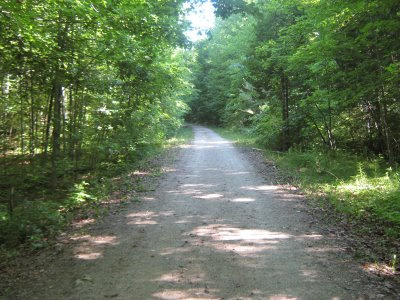 With such serenity surrounding me as I pedalled, my mind was allowed to wander and drift and I soon found myself rehashing the first couple of chapters of Loremaster in my mind. Last night I submitted a revised 1st chapter to the on-line writer's workshop for some feedback. As of this morning I had 2 very favourable reviews, both with some constructive suggestions to make it better. During my ride I formulated a few changes that will make the story better and, I hope, more saleable. I have removed the prologue - a fun Mission Impossible sort of thing that was enjoyable to write, fun to read, but, if I'm honest, doesn't
actually add to the story. I'll be putting it over in my Fiction Notebook in the near future.
Now, as promised - here's something I came across today that had me giggling. 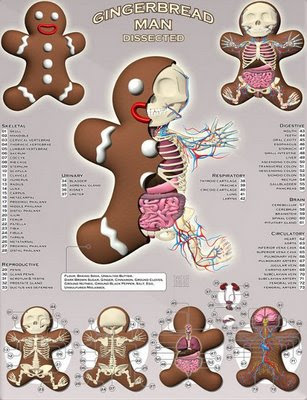 This was created by a gent called Jason Freeny and I encourage you to visit his website and have a look around. If you like this, and I do, you'll find any number of gems over there.
Enjoy
Posted by Dave Beynon at 12:53 1 comment:

Fairness - I'm a big believer in fair play.
I firmly believe that if we all treated each other with basic decency and an honest sense of fair play our world would be a lovelier place.
Recently in our local newspaper there was a letter to the editor that criticized three of our local politicians for attending an event hosted by the Canadian Bible Society. The event in questioned gathered together members of the different local denominations of Christianity to read the Bible - Old Testament and New - continuously from cover to cover (King James edition, I believe). First, let me say on a personal note I am encouraged by this. I find, anecdotally, that not enough Christians read the WHOLE Bible. I would have been more encouraged if the reading lead to discussion groups, etc, and perhaps it has. The letter writer's issue was separation of Church and State (an American concept, but a concept that has garnered validity here in Canada) and that it was inappropriate for our elected officials to attend such an event.
Fair enough, opinion stated and if that had been it I could have happily continued on to the next letter to the editor - something along the lines of lost kittens or something. But it didn't end there.
The letter writer then began a belittling attack on Christianity using phrases such as "fairy tale beliefs" "pretend supernatural beings" etc. Now - that's not fair. To disagree with politician's attendance is one thing and the writer made his or her point. There was no need to springboard into an intolerant and mean-spirited attack on people's beliefs.
I am NOT a Christian. There has never been a lot of appeal in the whole Christianity thing for me, but I am the first to admit I might be absolutely wrong. Perhaps Christ was God's son and the way into heaven is to accept Jesus as my personal saviour - again, I don't know...and neither do you. We could, just as likely, be subject to the whim of the Goddess or Allah or Zeus or we could all be balanced on the back of an enormous Cosmic Turtle, for all we know.
When the letter writer began to belittle Christianity, it hit a nerve with me. I have never been comfortable with arguments that hinge on making another person's point of view look small in order to make your point of view look big. That's what this person was doing.
In response I sent a letter of my own questioning the letter writer's logic in the assumption that attendance of a politician at an event automatically assumes that the politician is a practitioner of the group organizing the event or that the politician is pandering to that organization. The examples I lifted from the paper were a library opening and a wrestling award. I asked if the folks in attendance were either librarians or wrestlers or if they were pandering to these two lucrative voter demographics. I pointed out that attendance at such events for a politician were a matter of good manners and duty if invited and schedules allowed. I pointed out that the politicians may be Christians, as the letter writer assumed, but we don't know and that not knowing, any assumption is as valid as the next.
Sadly, the following week the letter writer missed the point of my letter and wrote again - belittling the letters from angry Christians (there were many) and calling mine "amusing" (the writer lumped me in with the Christians - ignoring that I opened my letter with my declaration of Agnosticism) and encouraged people to read the works of Christopher Hutchins et al.
Now - I wasn't about to be baited into a letter writing war - as much fun as that would be. I was going to respond to the letter writer's suggested summer reading with some of my own but I thought I'd post my favourite thoughts on the subject here.
They're Robert Heinlein's words from 1952 and they're just as relevant today.
Enjoy.
Our Noble, Essential Decency

by Robert A. Heinlein

I am not going to talk about religious beliefs but about matters so obvious that it has gone out of style to mention them. I believe in my neighbors. I know their faults, and I know that their virtues far outweigh their faults.

Take Father Michael down our road a piece. I'm not of his creed, but I know that his goodness and charity and loving kindness shine in his daily actions. I believe in Father Mike. If I'm in trouble, I'll go to him. My next-door neighbor's a veterinary doctor. Doc will get out of bed after a hard day to help a stray cat—no fee, no prospect of a fee. I believe in Doc.

I believe in my townspeople. You can knock on any door in our town, say, "I'm hungry," and you'll be fed. Our town is no exception. I've found the same ready charity everywhere. For the one who says, "The heck with you, I've got mine," there are a hundred, a thousand, who will say, "Sure, pal, sit down." I know that despite all warnings against hitchhikers, I can step to the highway, thumb for a ride, and in a few minutes a car or a truck will stop and someone will say, "Climb in, Mack. How far you going?"

I believe in my fellow citizens. Our headlines are splashed with crime. Yet for every criminal, there are ten thousand honest, decent, kindly men. If it were not so. no child would live to grow up. Business could not go on from day to day. Decency is not news. It is buried in the obituaries, but it is a force stronger than crime.

I believe in the patient gallantry of nurses, in the tedious sacrifices of teachers. I believe in the unseen and unending fight against desperate odds that goes on quietly in almost every home in the land. I believe in the honest craft of workmen. Take a look around you. There never were enough bosses to check up on all that work. From Independence Hall to the Grand Coulee Dam, these things were built level and square by craftsmen who were honest in their bones.

I believe that almost all politicians are honest. For every bribed alderman, there are hundreds of politicians—low paid or not paid at all—doing their level best without thanks or glory to make our system work. If this were not true, we would never have gotten past the thirteen colonies.

I believe in Roger Young. You and I are free today because of endless unnamed heroes from Valley Forge to the Yalu River. I believe in—I am proud to belong to—the United States. Despite shortcomings—from lynchings, to bad faith in high places—our nation has had the most decent and kindly internal practices and foreign policies to be found anywhere in history.

And finally, I believe in my whole race—yellow, white, black, red, brown—in the honesty, courage, intelligence, durability, and goodness of the overwhelming majority of my brothers and sisters everywhere on this planet. I am proud to be a human being. I believe that we have come this far by the skin of our teeth—that we always make it just by the skin of our teeth—but that we will always make it, survive, endure.

I believe that this hairless embryo with the aching oversized braincase and the opposable thumb—this animal barely up from the apes—will endure, will endure longer than his home planet, will spread out to the other planets—to the stars and beyond—carrying with him his honesty, his insatiable curiosity, his unlimited courage, and his noble essential decency. This I believe with all my heart.