I was reminded yesterday that we are into the Christmas season now by both my children.  They were telling me I'd better get it in gear and get the lights up, the tree decorated and the presents bought.  Well - it just didn't feel like Christmas - until this happened: 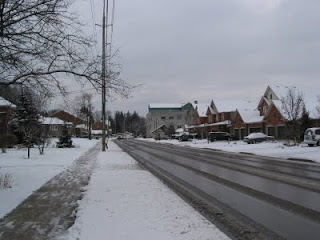 Yes - our first real snowfall.  It will probably all be gone by this afternoon, but there was enough on the ground to get the kids - and the dog - excited.  On the way to school this morning my son bombarded me with snowballs while Willow rolled at every opportunity.  There are a series of "doggie-angels" in the snow right along St. Andrew Street.

When I got back to the house I snapped these pictures: 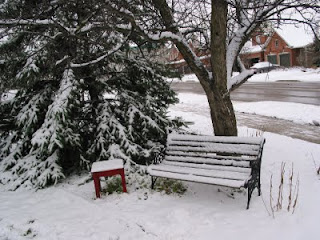 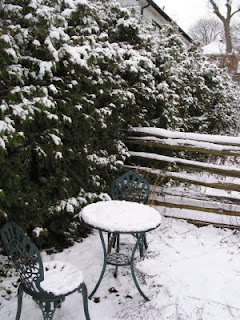 Since we've had another snowfall, I've posted another of the winter-themed poems over at the writing notebook.  You can get there by clicking this link.

There are a few other new things.  I am now sporting something that has been described as anything from "distinguished" to "scruffy".  Yes - following the Really Raggedy Andy stint at Hallowe'en, I decided to let the beard grow.  I'll post a picture soon.

Another new thing - we have decided to once again become a two car family.  My lovely wife discovered a sweet deal on a used Hyundai Elantra Station Wagon and we just had to take a look.  The car is in excellent shape, is very fuel efficient and has a low enough profile that a middle-aged golden retriever can hop into the back unassisted.  And the price was truly unbeatable.

What gives?  you might be asking.  Why so cheap?  If there's nothing wrong with it, why such a great price?

Well, I didn't say there was nothing wrong with it.  Mechanically it seems fine.  In fact the car is at our local garage being safetied today, otherwise I would have taken a picture to show exactly what is wrong with it.

Let's just say a paint job is in order - the sooner the better.
(Picture to follow - probably tomorrow)
Posted by Dave Beynon at 10:05 No comments: