It has been a while but I'm finally getting around to putting together a post. Settling back into routine proved to be a little harder than expected upon returning from vacation but while I'm not yet in the groove, at least I can see it.

One little vacation story to relate and really something kinda cool. On our last day of vacation while heading back toward the highway through Kingston, Ontario my wife asked if we wanted to visit the grave site of Sir John A. Macdonald - 1st prime minister of Canada. While visiting the grave we stretched our legs in the impressive old cemetery. The first thing my son noticed were a number of holes in the ground around one of the tombstones. I assume they were rabbit-holes but it was the only tombstone that sported holes around it. A little creepy to be sure but my son also spied a stick apparently dragged deep into one of the holes. Without a hint of hesitation his arm was suddenly shoulder deep in the hole retrieving the stick. It has since been dubbed "the Ghoul Stick" and is not allowed in the house. A few minutes later I was photographing an impressive family plot when my son came up behind me and said, "Hey, Dad, look at the box I found under that bush!" 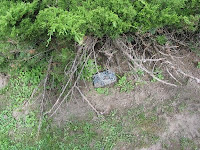 I turned and saw my son with the ghoul stick in one hand and in the other he held a sealed Tupperware container completely covered with camouflage tape. Now I had a pretty good idea what was in the box but I told everyone to stand a few feet back while I opened it anyway. Inside was a stamp,an explanatory note, some markers and directions to the next box. I wish I still had the note but it has been misplaced but it explained that this box is part of a game called Atlasquest - basically a scavenger hunt on a grand scale. Check out the website - they're all over the place.

Speaking of rejections - I had a useful one before going on vacation regarding my story Just Business. In the letter there were suggestions and constructive criticism and from those suggestions and criticisms a story evolved. The story is called Old Timer and I think it's pretty damn fine. It has, of course, been submitted to the magazine that took the time to offer the suggestions.
Finally - and it's funny because as I type this I just received an e-mail from them - The 3 Day Novel Contest is closing in. Each Labour Day Weekend a contest is held to see what kind of novel can be written over the 72 hours of the holiday weekend. I have entered the last 2 years and both novellas - The Platinum Ticket and Patriot - are works of which I am very proud. This year, however, I will take a pass. There are a few reasons - kids start school the day immediately following the weekend and I don't need to be exhausted for that. I am also building a routine in which writing a set amount each and every day is a crucial part of my success. I don't want to mess with the routine just as I'm establishing it. In the past I have found the exercise of the 3 Day Novel extremely rewarding - I highly recommend it to others and will no doubt do it again in the future - but just not this year.

Anyway, speaking of routines - I need to get back to mine...
Posted by Dave Beynon at 13:21 No comments: