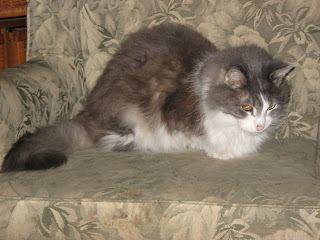 I have known Duffer for 20 years.  When I met him he was almost four years old.  He and I didn't hit it off at first.  He was one of 2 cats my girlfriend (now my wife) owned.  The other cat loved me.  Duffer didn't.  In fact, for the first year my future wife and I lived together, Duffer peed on just about everything I owned.  When it was obvious that I was going to be around for a while, the pissing match ended in a long standing truce.

When the other cat, Jesse, died a few years back, Duffer began to warm up to me.  After only 17 years he decided to be my friend.  My wife was still the human of choice, but I became a close second.  I would often end up with his frail form curled up on my lap, purring like a kitten.

Over the past few months we'd seen a decline in our old pal.  He moved just a little bit slower and grew a little thinner each week.  He was still bright and alert most of the time, although there were times he would pause while lying down, as if he couldn't remember if he was lying down or getting up.  Old as he was, he always made the trip down the steep basement stairs to use his litter box.  His appetite was good, until about a week ago.

Good old Duff had been eating less and his movements had slowed considerably, but his eyes were still bright and he was in no pain.  When you lifted him up, he'd still snuggle in and demand his pets, purring all the time.

Last night, after dinner, we discovered that Duffer had quietly removed himself to my daughter's room where he lay down for the last time.

Good news amid the mourning...

Things are unsettled here.  After a week and a half of activity surrounding my mother's death and funeral, I found myself alone - actually alone - yesterday.  I had some business to attend to at my mom's farm and a 45 minute drive gives a person's mind a chance to wander.  When I got to the farm, the folks I was meeting (furnace guys - there's a whole story, but not for here) were a little late.  I wandered around the empty house, doing a little cleaning and a lot of remembering.  It was my first chance to grieve on my own.  I'm kind of glad the furnace guys were late.

After my birthday, I wrote about resolutions and how one of they might already have happened but I was unable to talk about it.  Well, back on January 9th I received a call regarding a story I submitted for an anthology called Evolve2. The editor, Nancy Kilpatrick, told me that she was assembling the anthology and that my story had made the cut, but there were some details to iron out before I could talk about it.

I got the official word two days after my mother died.

It's bittersweet to be sure.  Here's a link that was posted on Facebook:

The name of my story is Symbiosis.  The anthology ought to be released in August.

I expect you all to buy a copy.
Posted by Dave Beynon at 19:09 No comments: