If you happen to see one of these:

You should probably pay attention to it.
Every year on the first weekend of April, the Beynon family makes an annual pilgrimage to the north to watch The Northland Chorus perform their annual show.  This year was their 45th show. For those who know me, an interest in 4 part harmony music will strike you as odd, I know.  I met the director of the chorus, Bob Shami, years ago when I sold his brewery beer cartons.  He is one of the most decent people I know and has a stellar voice, to boot.  The first Barber Shop show I attended was, admittedly, more out of supplier/client relationship building than actual interest, but I genuinely enjoyed that first show and have attended each year since (except maybe one...).
This year we decided to head up early and were making good time when we were unexpectedly introduced to some of the local wildlife. 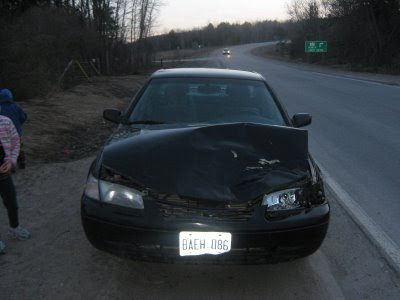 Out of the ditch it bounded with what one can only imagine was the embodiment of natural grace.  I don't know.  I only saw it looking straight at me for that millisecond before impact.
One second my mind is registering brown eyes and tawny fur and the next a thud, crumpling metal and the hiss of radiator steam.
Here's a little rule of the road:
If it is smaller than a moose - don't swerve.  Swerving gets you killed.
When I was a teenager, just learning to drive, I swerved to avoid a raccoon.  My dad gave me eleven different kinds of shit for that.  "If it's a moose - or a person - or if you have miles of time to react - then you swerve.  If you swerve for a raccoon and lose control of the car - you're dead - and for what?  Vermin!"
He really was a nature lover, my dad, but the point was made.  I didn't swerve and managed to get my family safely to the side of the road. 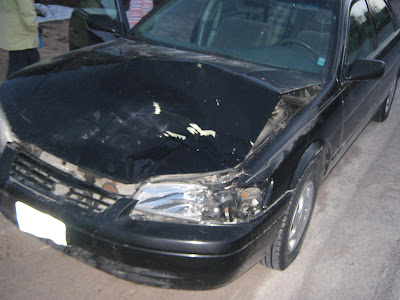 I made sure no one in the car was hurt.  Following the initial impact the deer flew right over the top of the car - we were very lucky.  After assessing the damage on the highway - there was plenty - I managed to drive the car to the next off ramp before the fluid in the radiator disappeared and the car told me enough was enough.
We met a nice policeman, some really unsavoury tow-truck drivers and became infinitely familiar with our insurance company.
Never actually met the deer, but he did leave us something to remember him by.  Those are bits of him. 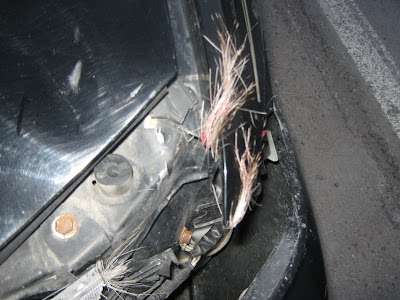 The rest was hotel rooms, towing arrangements, late night taxi rides and a car rental.  Through it all the kids were really troopers.  I think they've even forgiven daddy for killing Bambi.
Oh yes, he was dead.  I never saw the actual corpse on Thursday night - I was too preoccupied with getting my family off the highway and its heavy truck traffic - but yesterday on the ride home we spotted him.  A large white-tailed deer and from the position he was in, I can almost guarantee he literally never knew what hit him.
What could top off a weekend like that, you might ask?
Well, after driving in spring-like conditions all day yesterday, here's what I woke up to this fine April morning. 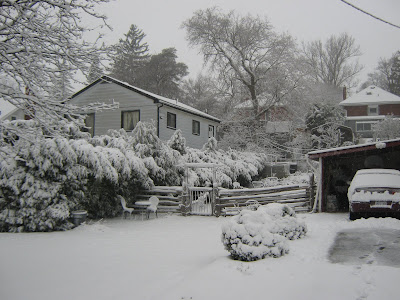