There is a little bit of disappointing news that showed up in the mail late last week. It came in a self-addressed stamped envelope and I have to admit that as soon as I opened it I was crestfallen. (Just on a personal note, I have always loved that word-crestfallen. I don't believe there's any other of 11 letter word that can so sum up a state of utter disappointment). Inside the envelope was a lovely letter from the good people at DAW Books. It was a rejection slip for my novel, Loremaster. 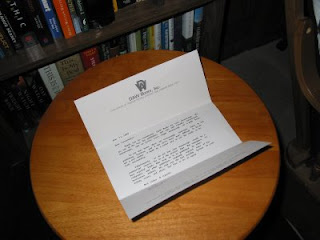 Although rejection is never a fun thing, I'm forced to remind myself that rejections are the bumps on the road to publication. Some of the bumps have useful information that should be heeded and you can adjust your course. Other bumps, like this one, are generic and you just have to put up with the jostling and continue onward. The next step for Loremaster is sending it off to a different publisher but before I do I'll need to assemble a chapter by chapter synopsis. It'll take me about a day or two to make the synopsis and then we'll be ready for round two.

In other news, my witch story keeps growing and growing. It's currently sitting at about 9000 words and I get the sense that it's only about half done. I'm really enjoying writing it but, man, it has taken on a life of its own.

When I'm finished the witch story and have the synopsis written for Loremaster I'll need to turn to a promise I made the kids. Years ago, when my daughter was little, I created a story called Gerry the Giant. Both kids are reading now and both have requested that I put Gerry the Giant into words for them. There's another kids' story dancing around in my head about Bladd the Blampire. What's a Blampire? Blampires are creatures that appear at dusk, usually in closets or under beds in rooms where there are young children. Blampires are kind of like vampires except they get their nourishment from children's imaginations. They look a little scary, but you can't always trust first impressions. They are actually very, very nice. Enough said about that for now.

The voice recognition software, Nuance's Dragon Naturally Speaking, is working out pretty well. After a few initial hiccups (I actually just had to train the software for the word ‘hiccups’ - it thought I was saying ‘pickups’) I'm settling into the software nicely. When you're as poor a typist as I am being able to put words on paper as quickly as you can speak is a real asset.

Well, this blog entry has gone on long enough-I need to get back to that one-legged witch and the little girl that won't leave her alone.