The Evolution of The Platinum Ticket

Someone recently asked me a spin on the old “Where do you get your ideas?” question.   Upon hearing that my novel, The Platinum Ticket, had been shortlisted for the Terry Pratchett Prize, they asked, “So how did you come up with the story?  How long did it take to write?”  Well – let me see…
The 3 Day Novel
In June of 2006 (at least I think it was June), I was driving somewhere and on the radio was an interview with one of the people who run something called The 3 Day Novel Contest.  The whole idea began in 1977 when some writers in challenged one another to write a novel over the upcoming Labour Day Weekend.  It caught on and became an annual event.
At the time, I was spending my days selling packaging and retail displays and hadn’t written anything of note for years.  I figured I’d give myself the gift of a complete weekend of guilt-free writing (with my wife’s permission, of course).
Because a goodly portion of professional sales is alone time in the car travelling from one customer to the next, I was able to think about a potential story quite often leading up to the long weekend.  It was a story that had been dancing around in my head for years, but I’d never made myself sit down and get it down on paper.
Friday at midnight was the starting point.  In preparation my wife had cleaned my office, moved the coffee-maker downstairs, set me up with snacks both sugary and healthy (she is a nurse by training, you know) and told me that I wasn’t allowed to let myself become distracted.  In retrospect, I probably wouldn’t have done the 3 Day Novel thing if it hadn’t been for, not just the support, but the whole hearted encouragement of my wife.
At the stroke of midnight I started.  At the time, my typing was atrocious.  It’s not much better now, but at least I know where most of the letters are.  I had decided I would be writing my three day novel longhand.  The first page spilled from my pen, then the next and then another.  It had been so long since I’d written fiction that the words erupted from me.
The next three days were a blur.  I drank way too much diet coke and coffee, ate far too much beef jerky and chocolate, spend too little time sleeping (I think about 7 of the 72 hours were spent sleeping) and finished with a neat little novella of just around 21,000 words. 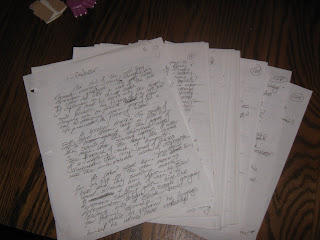 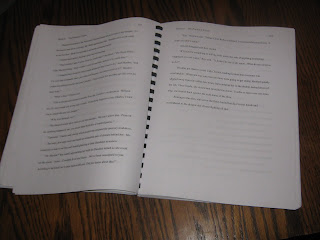 Late on the 29th of December I finished the story, but I wasn’t done yet.  I stretched and went into the house and collected the dog for a little walk down the sideroad.  When I returned, I grabbed another coffee and headed for the door.
“I thought you were finished?” my wife said.
“The story, yes,” I replied, “but now I need to edit.”
Just about a day and a half to edit 93,000 words.  I was really too close to the work to edit for story and structure and wording.  All I could hope to do was find spelling and grammar mistakes and anything that really stuck out like a sore thumb.  A word of advice – if you can help it, don’t ever try to edit a complete novel in 38 hours – it’s just not healthy.
On December 31st the book was as done as it was going to be and I was exhausted.  Physically and emotionally, I was spent.  There was on last hurtle – e-mailing the book to Transworld Publishers before the midnight deadline.  I did, of course, remember that midnight comes 5 hours earlier for my friends in the and planned my time accordingly.  The in-laws only had dial-up internet at the farm so I waited until we went into town to my brother-in-law’s house to e-mail the story.
After making certain that I had included all attachments and required information, at 2:03 pm I hit the send button, breathed a sigh of relief and reacquainted myself with my family. 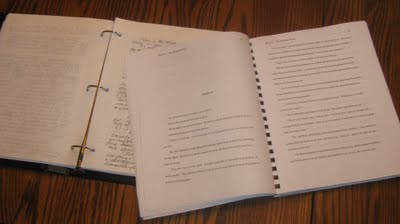