Well, just take a look over there at Publishers Weekly. 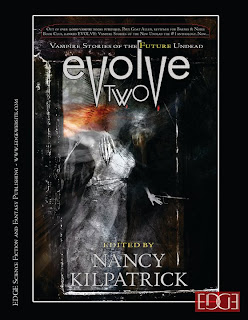 They've reviewed Evolve Two - Vampire Stories of the Future Undead, the anthology edited by Nancy Kilpatrick in which my story, Symbiosis appears.
Here's what they had to say about the anthology:

Kilpatrick opens the sequel to 2010's Evolve with a lengthy essay on vampiric history, setting the stage for 22 stories exploring the future of vampires. Some are comedic, like Kelley Armstrong's "The List"; more tragic are a predator's pleas for justice in Michael Lorenson's "Six Underground" and a simple attempt at companionship between a lonely human and an unexpectedly endangered vampire in David Beynon's "Symbiosis." Kilpatrick and her authors have avoided the common pitfalls of themed anthologies by creating an assortment of tales set in unique worlds, from the mundane to the postapocalyptic and interstellar; the futures don't quite reach Stapledonian depths of time, but Sandra Kasturi's "The Slowing of the World" hints at them. Never repetitious or dull, this anthology stands as a model for other editors to contemplate. (Aug.)
Kinda nice to be singled out for a mention by the good folks at Publishers Weekly.
Posted by Dave Beynon at 09:51 No comments: