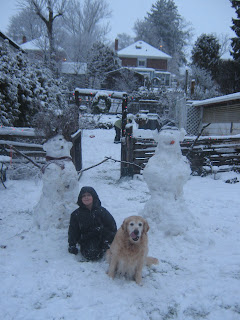 We've flirted with winter over the past few weeks.  We even had enough snow on the ground for a mini-snowman a few weeks ago  (he was doomed to puddledom the very next day).  Until the last few days it hasn't really felt like Winter.


We now have enough snow for TWO persons of snow!

I'm not sure if I've kept this a secret but here goes...

I am not at all fond of wintertime.  I might even go so far as to say that I hate winter (though, with children this view has mellowed in recent years). 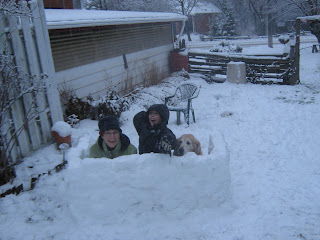 I think I can trace my dislike of winter back to my childhood.  We grew up in the snowbelt and lived through some serious amounts of snow.  There are photographs of my family standing on top of a drift (with the dog) that went over our drive shed.  Although we often had a kindly neighbour who used his tractor to blow out our driveway, there were enough times that I was out there with a shovel clearing six, eight, ten or twelve inches, only to have another such accumulation within hours.

But as a kid growing up I did build the occasional snow fort, though mine were most hollowed out of huge drifts behind the barn.  And I do seem to remember my share of snowmen as well. 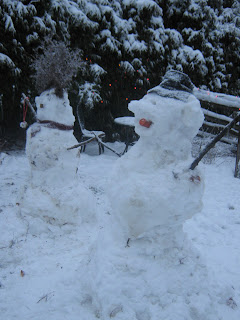 Part of my unfriendliness toward this time of year has to be attributed to my father.  He had a tradition, which I have continued for my children, that I got a kick out of as a kid.  After the first significant snowfall of each season, my dad would walk to the front door, fling it open and declare in a loud, defiant voice:

It's pure gold.  I encourage everyone to try it.  I actually have a theory that if absolutely everyone did fling open their door after the first snowfall and scream their hate of winter that the combined escaping heat from all of those open doors would halt Winter in its tracks. 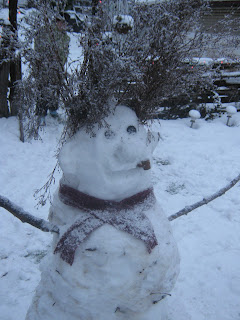 My own, personal battle with Winter started, I think, when I began to drive.  It is so much easier to blame the personification of the season for ending up in the ditch than to seriously consider if you were really driving appropriately for the conditions.  I have kissed a few ditches and once rolled my car, only ever in the winter and the car roll thing was NOT my fault.  (Honestly, some asshole blew his driveway's snow right across the road, just beyond the crest of a hill where it frozen overnight into a six inch high diagonal wall of doom.) 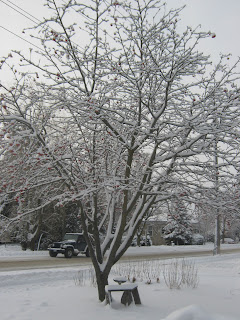 I really got to hate winter when I began commuting great distances each and every day.  It's funny.  For a dozen years I was driving more that 100 thousand km (a third of that winter driving) and the worst thing that happened was I got rear ended on an icy on ramp.  But it was always white knuckle driving and it's driving I do not miss in the least. 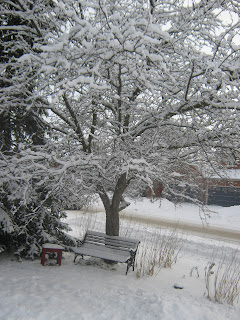 And I've mellowed.  I think it's the kids.  They see the snow through different eyes.  They see potential snowmen, snow forts,
snowball fights (I get a constant barrage from behind as I walk the boy to school each day) and trips to the toboggan hill in nearby Salem.  I still see the potential for car accidents when the flakes are drifting down from the sky, but you know what - I'm starting to see snowmen, too. 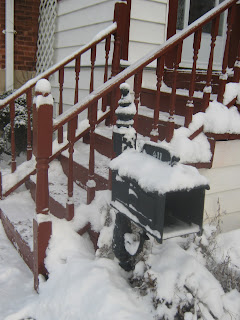 And even I have to admit, it's really very pretty outside.
Posted by Dave Beynon at 11:27 No comments: