Enter the Dragon...er, the Welsh Dragon, that is...

Wales holds a special place for me.  I was raised on stories of Wales from my father's youth.  I always felt that I knew the places from my dad's descriptions and you know what?  It was partly true.

To get to Wales we could have taken a train, but far more exciting, I think, to drive on the other side of the road.
A lift from my aunt brought us to Gatwick Airport's car rental and after waiting for other folks to get their paperwork in gear we got this: 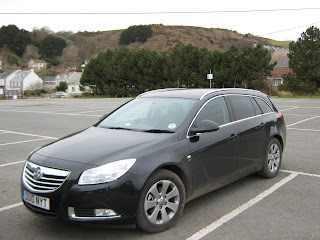 It was a Vauxhall Astra. Vauxhall, I discovered, is GM's presence in Europe, but they don't advertise that fact at all.  In fact, the only item on the entire car that I could find that had a GM mark was the gas cap.  The Vauxhall served us very well.  It was fairly fuel efficient and had plenty of power.  The only problem was that some joker at the factory put the steering wheel on the wrong side!

I was a trooper and adapted.  Our first step was to navigate Britain's busiest motorways which, all things considered, was surprisingly easy.  The signage is good and through the photo-radar enforced use of variable speed limits (determined by constantly monitored volume of traffic), we never slowed to less than 40 mph.  And this was at rush hour (I have since been told we were lucky with the traffic, as well).

We followed excellent directions into the west of England and crossed over a massive new bridge into Wales.  After a brief roadside stop for the worst Bangers and Mash anywhere on the planet, we continued on.  Everything went fairly well until we were about 12 or 15 miles from the town of Dinas, where my cousin lives.  Roadworks at a few crucial roundabouts made us lose our co-ordinates and we became slightly lost down a secondary country road.  After a few minutes we came to Scolton Country Park, an old manor house and grounds  which have been converted into  a public park.  At the visitor centre we spoke to the cleaning lady, asking her how far to Dinas and how to get there.

"Ohhhh." she said.  "It'ud have to be about ten mile from here.  Your best bet is to go back to Haverfordwest and then go to Fishguard and then out to Dinas from there."

She showed us the route on a map on the back of a complementary Pembrokeshire Coast National Park  Coast to Coast booklet.

"Wait a minute," said I. "If we take this little road we're on and follow it to this little road over here - why that takes us directly into Dinas without messing around with those two other towns."  I felt like I was discovering the new world with my astounding cartographic skills.

The cleaning lady rose a skeptical eyebrow.  "Well," she said, "I suppose you could go that way..."

On the way back to the car we discussed the merits of my plan.  My wife was weighing in on the side of local wisdom while I knew best with my newly discovered route.  As we left the Scolton Country Park driveway my signal light flashed left - away from Haverfortwest and the cleaning lady's obviously erroneous directions.

It didn't take long to discover why some roads just look little on the Pembrokeshire Map.  It's because they are little.  They are skinny, twisting roads, not much wider than a cycling path.  With hedgerows looming on either side, it felt claustrophobic on those narrow, narrow roads, but I was fueled with the conviction that I knew best.

After about half and hour we were closing in on our destination.  I just knew we were getting close.  After travelling up one side of a mountain and down the other how could we not be?  As we skidded into a little grouping of houses at the bottom of a valley, I spotted a rust speckled sign being strangled to death by ivy.

Dinas was 3 miles away and by hell or high water I was going to get us there.

The Vauxhall screamed at me as I first-geared her to the initial little level part of the ascent.  Pressed back in her seat, my wife quietly asked if I was sure about this.

"Just let me do this!"  I said, a little more forcefully than I would have liked.

After an eternity of climbing we came to the end of a driveway where a pair of rubbish bins stood waiting for pick up.

"Jesus," I said with renewed confidence.  "If a garbage truck can make it up here, I'm damn sure a brand new Vauxhall can."

With the engine protesting we pushed on, ever upwards, as the road continually narrowed.  After a few minutes we met another Land Rover and I pulled into a gateway to a pasture field to let her pass.

"Well," I said as we continued.  "I supposed that'll be the biggest vehicle we'll likely meet up here."

The road thinned a bit and grass began to appear, forcing its way through the asphalt in the middle of the road.  I had just maneuvered around a corner when we met the bus.

I slammed the car into reverse and found a little wide spot where I edged the Vauxhall into the edge of the hedgerow.  I bit my lip as the bus'  side mirror whispered past my window.

After the bus, I knew this mountain couldn't throw me any more curves.  After another couple of miles without meeting anymore traffic we ended up at Dinas.  My wife patted me on the arm and I turned to her.

"I'm pretty sure," I whispered to her,"that one of those forms I signed at the car rental office mentioned that road in particular - and that I wasn't supposed to drive on it."

As I turned onto Dinas' main street I said quietly, "I guess I should have listened to the cleaning lady..."

My wife to her credit said only, "But think of all the beautiful scenery we would have missed out on."

I really married up.


Next time we'll continue with more of Wales...
Posted by Dave Beynon at 12:31 No comments:

An Eye on London

I know I promised yesterday to share a little something Welsh, but we'll need to wait a day or two.
Before we travelled to Wales we saw a few points of interest in London.  Of course, what's a trip to England without a quick stop to visit Liz. 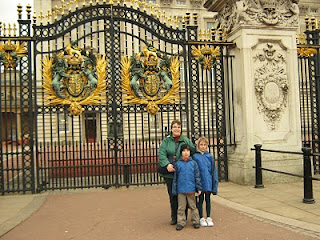 I didn't see her flag, so it's likely she wasn't in residence.  We all waved to her anyway.

We also took a trip on this thing: 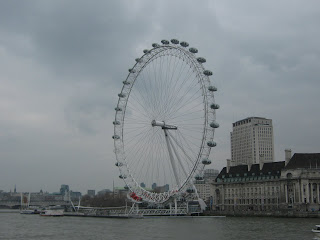 Wow.  Unbelievable views from the comfort of a safely sealed capsule.  The slow rotation takes between 30 and 45 minutes and provides unparalleled scenery.   There's really only one safety rule... 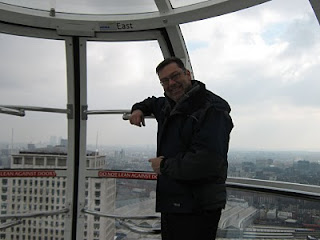 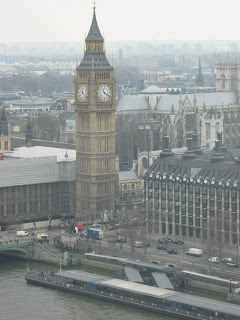 Next we rode the subway and I had to snap this picture: 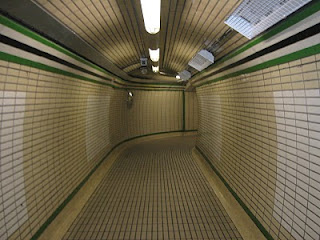 I'll have to re-watch the movie to be sure, but I think this is the same tunnel used in An American Werewolf in London.  From this point on I told the boy that the mirrors mounted at the turns in the tunnels are to see if you are being chased by a werewolf.

The subway dropped us off near the British Museum where I was thrilled to meet this handsome fella: 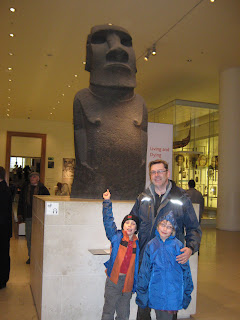 When I was a kid there was this incredibly informative and poorly animated cartoon called The Wonderful Stories of Professor Kitzel.

Through the use of a lever-activated time machine, the good professor opened a window on events from the past.  I credit a fairly robust general knowledge to the early influence of the aforementioned time machine.  The show introduced me to my hero, Thor Heyerdahl and to the Easter Island statue above.  But nothing on the show stirred my imagination like the episode which covered the Rosetta Stone. 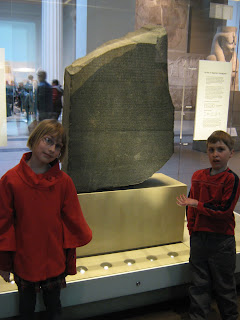 I'd waited my whole life to see this thing.  (And, yes, my kids do know how lucky they are.)

It took my breath away.


Next time I promise we'll go to Wales.
Posted by Dave Beynon at 12:50 No comments:

2 Weeks in the UK

43 years ago I was born in Accrington, England and, as the story goes, I was lucky to be born alive.  When I emerged into the world I had my umbilical cord wrapped around my throat.  Not only that, it also had a knot in it.  The knot is so rare a thing for a live baby to have in his umbilical cord that the good folks at the hospital apparently saved it in a jar of formaldehyde.  I assume it still sits with a peeling label, dusty on a shelf.

Well, I did live and when I was 4 months old the family moved to Canada.  Except for a twelve hour stop in London waiting for a ferry crossing to Belgium, I'd never returned to the land where I was born. Now I have and it was an enlightening and emotional trip.
We flew in to Gatwick airport and as luck would have it my aunt and her husband live a short jaunt away in nearby Copthorne Bank.  They live here: 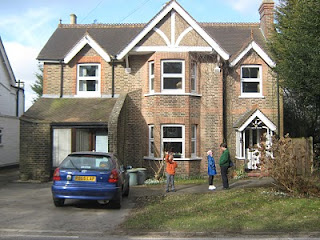 It is called "Crown House" and would serve as a home away from home for our stay.
Close to my aunt's house is a place called "Wakehurst" - a park and manor house that are part of Britain's National Trust.  I was told it was a favourite place of my father who was a friend of all things green and living. When I was a kid and my dad taught me how to draw, his bridges invariably looked just like this: 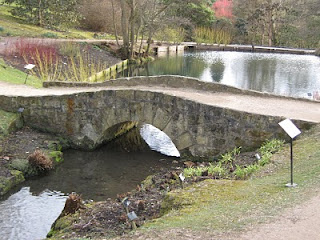 A little walk down from this bridge was the Manor House: 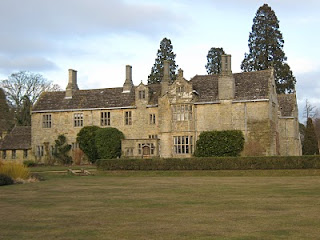 It is an impressive structure and one I photographed extensively.  I will be using details of the Wakehurst Manor House in my Middleman Acquisitions stories.  After all, Alistair Middleman needs a stately home to live in.
We took many trips into London.  The rail and underground systems make getting around easy for a family at a very reasonable price.  On our first trip into London we saw this 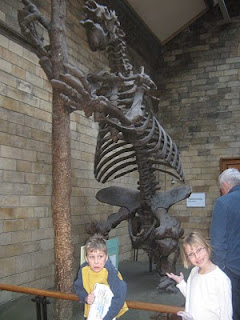 at the Natural History Museum.  Then we travelled up the road a bit to Royal Albert Hall. 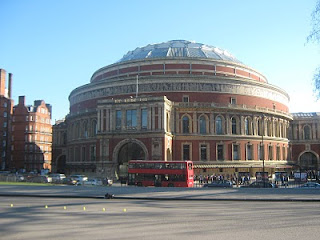 The boy made me snap this one quick so that we'd get the double decker bus in the shot.
The following day we visited the Tower of London and got the obligatory picture of the Beefeater. 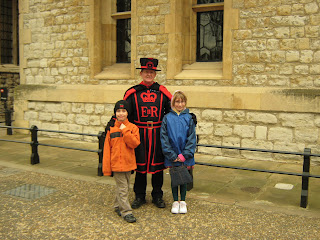 And that's it for today.
Join us here again for more pictures as we explore London from on high and visit the landscape of Wales, where I'll disclose some family history concerning Wales' greatest poet and its greatest hymn writer.
Posted by Dave Beynon at 11:07 No comments:

Got back from the UK Friday evening - picked up the lovely Willow from the kennel yesterday - getting everything in order for the resumption of everyday life tomorrow.  A detail post about the Beynon's British adventure will follow - probably tomorrow...
Posted by Dave Beynon at 11:06 No comments: