Who doesn't love the dinosaurs?

Creationists, that's who! I guess that it's not that they don't love 'em - they're just so damned problematic. Good thing they were all wiped out in the Flood.

Anyway - I love dinosaurs. Always have. As a wee lad I used to model them from plasticine. Everyone loved the brontosaurus (I guess they're known as brachiosaurus now) and of course tyrannosaurus rex (after all, he was the king) and good ol' stegasaurus with the decorative fashion statement plates. Lower on the list was my all time favourite dinosaur - triceratops.

I think the reason I loved the triceratops was a story I heard as a little kid about some t-rex and triceratops fossils found locked together in mortal combat. I was fascinated by the idea that the gentle, yet tank-like herbivore was able to defend himself against the mightiest predator ever to walk the earth. For me, they have always stood as a symbol of the quiet gentl 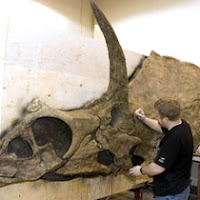 e giant who wants to make his way in the world and just wants to be left alone. But God (threw that one in there for you Creationists...) help the creature that disturbs his peace. They are the personification of physical toughness.

Well, imagine my delight this week when this not so little guy went on display. His name is Eotriceratops xerinsularis and he was discovered in the badlands of Alberta. That's right - this bigger, tougher ancestor of the triceratops I grew up with as a kid was Canadian. I'm thinking I'll have to make up a story for the kids tonight with Xerin the Eotriceratops front and centre.
Posted by Dave Beynon at 16:20 No comments:

Today was an anniversary of sorts.

Exactly one year ago today my former employer of 16 years called me into a boardroom and informed me that my services would no longer be needed. It was this catalyst that sent me on a whole new path in my life. It prompted me to re-evaluate those things in my life I deem important. It prodded me to take up the pen again after far to many years away. The taxi ride gave birth to a short story - The Long Ride Home.

One year ago today, with a without-cause dismissal, my old life ended and a new one began - a much better life in every way. Throughout the day I had been musing about the strange turns and happenings that life tosses at us and how lucky I am for all the things I have.

When I got home tonight the little red light was flashing on the answering machine. I pressed the button and listened to a message from the head of the payroll department of my former employer. It was a request that I give her a call as soon as possible. One year to the day of my unwarranted firing my former employer wanted me to call them?!?

Well, the call was from Montreal so I girded myself for an automated phone message system - in French no less! After some deft bashing of buttons I got through to her.

"Good evening, Mr. Baynun (never fails, it's always mispronounced) I am afraid I have some bad news for you." she said.

"How on earth could you have bad news for me," I replied and I'm sure she could hear the grin on my face, "I no longer work for you."

"Well, do you remember the lump sum settlement you took in February of this year."

"Well, there was an extra pay added to that sum that was paid out to you."

"Gee," I said, the smile widening, "That sounds like your mistake."

"Yes, Mr Baynun, it was our mistake."

"I fail to see what this has to do with me."

"Well, you should never have been paid for that extra pay period. We need to reconcile."

"Once again - your mistake. I fail to see what this has to do with me."

"Well, you weren't owned those monies."

"We're going in circles here. I really think you need to put together a nice legal document and send it to me."

She agreed and we said goodbye. I find it amusing that nowhere in our conversation did she actually come out and say that she expected me to pay the money back. Good thing, too, because I'm pretty sure you can guess the odds of that happening.

The thing that got me was the gall. I had spent 16 years with this company. When I was dismissed I was their top producing sales rep for my division. The settlement, the pension and everything else are all history. It is a closed book as far as I'm concerned then out of the blue - one year to the day of my firing - some bean counter in Montreal realizes they made a mistake eight fucking months ago and feels that it's cricket to come a-calling?!? Suck it up and write it off because I'm telling you, if they want that money they can talk to my estate because as long as I draw breath that company will not see one red cent from my pocket!!!

It's all really very funny. I look forward to her legal document...
Posted by Dave Beynon at 19:01 2 comments:

Well, it's early Sunday morning and I think today I'm finally going to finish Small Town Secrets to my satisfaction. I'll get a little bit done this morning before the house stirs but the big windfall will come this afternoon. My son (4 years old) called up his little buddy to come over this afternoon. Since my daughter and wife will probably supervise, it looks like 2 or three hours of clear sailing. Should be more than enough time to finish.

Work has been occupying my time, but I'm also a member of the local Heritage Committee. Our job is to research and preserve those things in our community of architectural, historical or cultural significance. It is an advisory committee to the Municipality and it is a great insight into local politics and the unique history of the little hunk of the world I've chosen to call home. With work, the Heritage Committee, playing with the kids and writing, it makes for a busy life.

I've also enlisted the aid of the lovely Mavis Beacon to teach me how to type. Retraining the fingers is a hard job, but I'm learning. Still, when I want to type fast I'm still using hunt and peck...It'll come.

Anyway, it has been a week of parent-teacher interviews (the kids are doing really, really well) and playing with power tools (the 18 volt battery packs make you feel like some kind of handy god). Life is good and I've no complaints.

I hear little feet upstairs - time for breakfast.
Posted by Dave Beynon at 07:46 No comments: