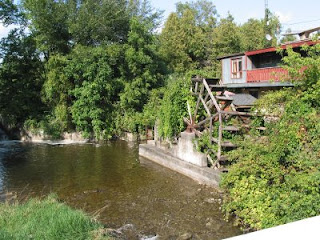 Over the weekend the Beynon family attended the 20th Annual Eden Mills Writers Festival. We donned our rain gear and made the 25 minute drive to picturesque Eden Mills.

This was our first visit to the festival, although my wife and I have talked for years about attending. What really attracted us this year was the impressive lineup of children's authors. The one that cinched it and made it a must attend event, despite the rain, was Dennis Lee. If you don't know who Dennis Lee is you will at the least know his most famous poem, Alligator Pie.

For a complete listing of all of the authors that attended, please follow this link. Most of my time was spent with the kids listening to the children's authors and illustrators, but I did manage to slip away to listen to a reading by Robert J. Sawyer, Canada's self-proclaimed Dean of Science Fiction. Having seen him interviewed on television, and listen to him on the radio, his performance was everything I expected. Loud, energetic and enthusiastic. He read from his recent novel, Rollback. I recently read the novel and listening to Sawyer read his own words, it was interesting to note the parts he chose to emphasize that I, as I read the novel, would not. This experience really underscores how important it is for a writer to have a second set of eyes - and ears - going over his work for a feel and understanding of how others will approach it.

While enjoying the day in Eden Mills I noted that our local Conservative MP, Michael Chong, was also in attendance with his young son. This doesn't surprise me as it has been my experience that Michael is very much concerned with local issues and very supportive of all events of note in his constituency. What interests me is that on the morning that our conservative Prime Minister - who has recently announced $40 million worth of cuts to the arts - called an election, our local conservative MP was attending the Eden Mills Writers Festival.
It was an enjoyable day with the entire family in a picturesque community and I would wholeheartedly recommend it to anyone interested in reading or writing...or spending some time in a lovely little village.

On a different, but related note, I received an e-mail last Thursday from PRISM International, the University of British Columbia's literary magazine. It was a call for submissions for their literary nonfiction contest. I've chosen to blow the dust off the Long Ride Home. After some cleanup and increased perspective, the manuscript is ready to be sent out.

I've also become aware of a Master of Fine Arts Program in Creative Writing offered through the University of Guelph. I find myself interested. This bears further investigation.

I'll keep you posted
Posted by Dave Beynon at 12:12 No comments: