Since it snowed several times yesterday and there was another wee blanket of the white stuff this morning, I decided to post another of my winter themed poems over at the Notebook.  You can get to the Poetry  - yes, that's right - poetry page by clicking here.

I have been rebuilding my Edgeling synopsis this morning and needed a little break. (The re-writing of the synopsis is going quite well and is, I think, better than the one that vanished last week when Windows Vista decided to update.)

I saw an e-mail notification about Stephen King's new novel, Under the Dome.  On his website he discussed the evolution of the story and has posted a PDF of the original 60 typewritten pages of The Cannibals which would grow into the current book.  I figured there were worse ways to procrastinate that to look at the working process of one of the most successful storytellers in the world so I open the document and began to read.

I marveled at the old typeface and the bluish tint to the old paper (he started this thing back in the 80's when he was still using an electric typewriter).  I was delighted to see the number of mistakes that had been crossed out and corrected.  But then I had to give my head a shake.  As I saw his handwritten corrections I was taken aback.  I pulled off my glasses, rubbed my eyes and looked again.

Mr King and I have nearly identical handwriting.

This opens up all sorts of fun possibilities - especially if I can get my hands on his cheque book.  Imagine the fun I could have with the world's greatest horror writer by sending him weird and freaky letters in his own handwriting...There might be a whole new book there for either one of us...

Tremendous, clumped-together drifting flakes of it fell from the heavens this morning and decided to stick around for a while.

Everyone got into the act. 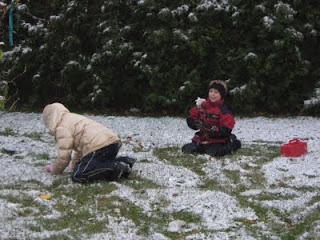 My son - a little optimistically - got out the snowball maker. 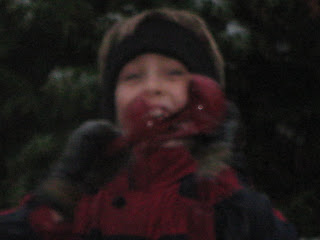 Soon, buddy, but not just yet.

My daughter got right down into the snow and got to work. 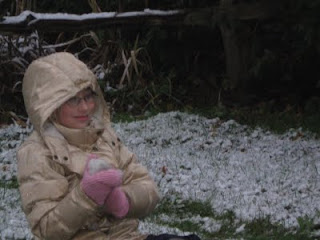 Even Willow couldn't resist a little roll in the freshly-fallen snow. 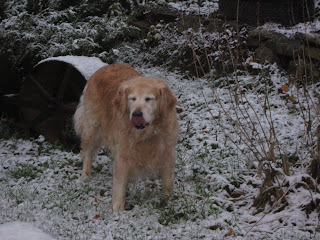 To celebrate the first snow (which has turned to rain already) I'll be posting a snow themed poem I wrote last year over at the writing notebook a little later today. Here's the link.

And what would the first snowfall be without a snowman - courtesy of my daughter... 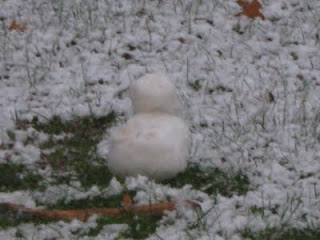 My favourite holiday.  Just as the air turns crisp, the leaves fall from the trees and snow starts to peak around the corner, you really need something to celebrate.  Hallowe'en has always done that for me, so today I'm talking about Hallowe'en followed by a little rant about laziness.

In what has become an annual pilgrimage for the Beynon family, we headed on the Thursday before Hallowe'en to Tim Murton's Twilight Zoo.  My daughter and I attended Tim's workshop this year and made Trixie, the albino black cat.  Each year the trip to the Twilight Zoo is a treat as we get to see perennial favourites and there is always something new to delight.

This guy has greeted us at Tim's front gate ever since we started visiting the Zoo. 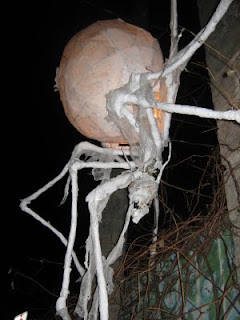 He hangs menacingly off the building, sneering at all who pass through  the gates.  Inside the gates are a host of witches, sharks, skulls, mushrooms, ghouls and cauldrons.  This rock group - I'm assuming they're the Grateful Dead - makes me laugh every time. 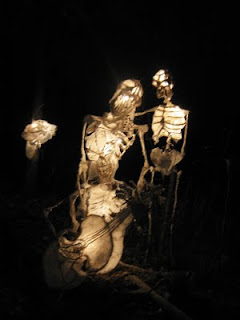 Every year there is something new and impressive.  I was most impressed by this: 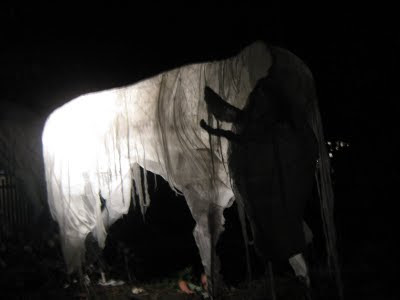 The Unicorn is my daughter's new favourite.

On to Hallowe'en.  Pumpkins and Jack O' Lanterns are always fun, but consensus on what ought to be carved can be difficult for a family of four.  Through discussion and compromise we came up with this cyclopean vampire. 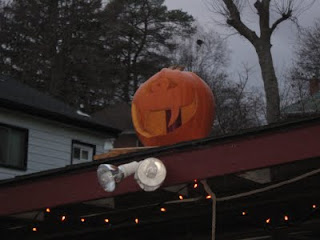 We mounted him on the carport roof for better street appeal.  Here he is lit up: 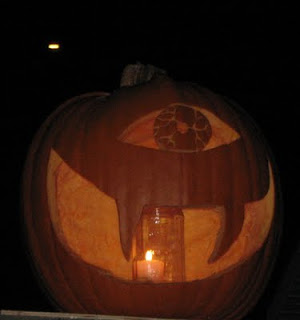 Next were costumes.  My daughter loves Garfield and my son is taken with Ninjas lately.  Their little buddy looked great as a particular square-panted character. 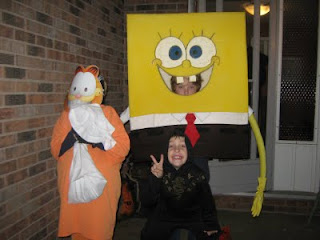 My wife gave out candy this year and looked fabulous as the neighbourhood witch. 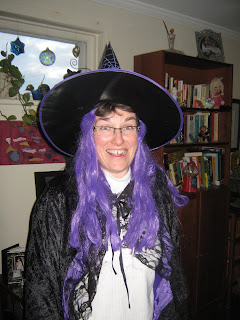 I, of course, had to do something with some back story.  I got to wondering...what would happen if Toy-land's happiest couple, Raggedy Ann and Andy, broke up?  How would the divorce weigh upon Andy?  How would he deal?  I figured he would leave and join a carnival and, as everyone knows, the carnival life can be a rough one.  After years on the road, filled with bitterness over the idyllic life he'd squandered, I figured Andy would look a little like this: 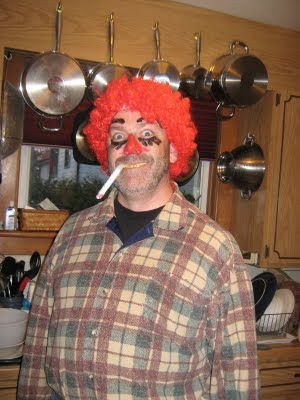 And, yes, I did scare a few children.

Now on to the rant.  During the course of this blog post I have typed out the word Hallowe'en six times so far and guess what?  Every time I type Hallowe'en the spell checker tells me I've typed it incorrectly.  But I haven't.  The spell checker wants to see "Halloween" - look at that, no red squiggly line underneath but without the apostrophe, Hallowe'en is spelled wrong.     And where the hell does the spell checker get off telling me that "Hallowe'en",  spelled completely and correctly, is wrong?

Have we become so lazy with our 144 character text messages and our r u ok and lol's etc, that to add a simple apostrophe is too much work?  I shudder to think of the day one of my kids comes home from school with a spelling test where they've had a point deducted for including the time-tested and true apostrope in Hallowe'en.

Maybe next time I'll talk about why Pluto is still a planet, regardless of what some astronomers think...
Posted by Dave Beynon at 12:10 No comments: