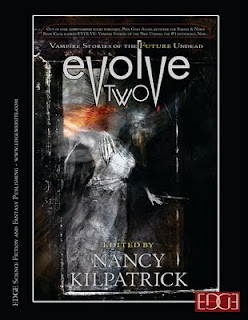 It has come to my attention that there is a little taste of Evolve Two over at Underwordsblog.com's Summer Free Fiction Sampler.  Scroll down until you see Evolve Two, then click on the book title to see who of the 22 authors was chosen to represent the anthology.
Posted by Dave Beynon at 15:17 No comments:

In the Shadow of Atlantis 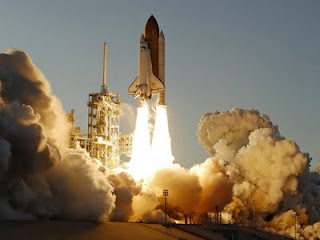 There’s this thing called the Fermi paradox.  Very basically it says if there’s a high probability of the existence of extraterrestrial civilizations (Fermi, I think, had some sort of equation, but it was more vigorously explored in the Drake Equation)  - then where the hell are all the aliens?
There are theories about why we haven’t encountered evidence of other civilizations.  They range from humanity is alone in the cosmos to an inherent self-destructiveness in intelligent species to suppression of evidence by our governments to the intentional isolation of humanity from others in the cosmos by those very same aliens we’re looking for.  There’s another theory about the narrow window of opportunity regarding radio signals and the belief that we just might not be looking at the right place or that we’re unable to detect a message in the first place.
In the shadow of the final shuttle launch, I put forward another hypothesis:
Disinterest.
If there are other intelligences in the universe and if they are anything like us, perhaps their evolution brought them to the fork in the road that stands before humanity.  If other intelligent societies are anything like us perhaps they, like us, decided that tax breaks were more important than reaching out into the cosmos.
Perhaps they, like us, reached for the nearest little satellite – say a moon or neighbouring planet – and thought “Wow – that was really, really hard.  And it was risky, too.  Do you know how dangerous it is to send folks into space?  There’s real risk involved and you know how risk adverse we are…And expensive?  Wow.  I keep seeing my taxes go up and up and I think about all those resources spent on that risky stuff that I really don’t understand too well?  Let’s face it, for a while it was all fun and good but really, there comes a time to say enough is enough.”
Perhaps they, like us, thought that unmanned (or whatever their equivalent might be) spacecraft would fill the void.  Maybe they, like us, committed to maintain their multi billion dollar space-station for another ten years or so.  Maybe they, like us, fooled themselves into believing that a return to capsules and rockets was not a giant step backwards into galactic insignificance.
Maybe that’s why they, like us, never got to see that perhaps they weren’t alone in the cosmos after all.
Posted by Dave Beynon at 13:33 No comments: