It has been a while since my last post and a lot has happened around the Beynon compound. Where to start, where to start...

There have been moments of disillusionment regarding the Display job. Things are far more political than I'd been led to believe. There are different stories from different places changing from day to day, minute to minute. I had hoped (naively perhaps?) that a smaller, privately run company where I answer only to the president would be devoid of the pitfalls of my previous employer, but I guess human nature is human nature where ever you go. I've been doing some soul searching over what I want my future to look like and whether this company can get me from point A to point B. The jury's still out, but they are closely scrutinizing the situation.

Writing has been sparse leading up to the Yuletide season but I did get in a few snatched hours going through Loremaster and skimming and re-reading The Platinum Ticket for future expansion.

Small Town Secrets continues to be difficult for me to write. I really like what I've written so far but the subject matter is ... well, it's unlike anything I've written before. It's very tough to get what I want to say out of my head, through the arm, out the pen and onto the sheet. Every so often everything will be right and I'll sweat out another page or two. It's tough going but I'm sure it's worth the effort.

I've been reading a lot. I finished Fragile Things by Neil Gaiman a few weeks back and found it an entertaining read. I just finished Tom Holt's Earth, Air, Fire and Custard. It had a real Terry Pratchett kind of feel to it, but with lots of references to Canada it pandered to that little insecurity that all Canadians have over the need to be mentioned and see anything concerning Canada in print. Bradbury Speaks was a collection of Ray Bradbury's essays that I quite enjoyed.

I am almost finished the novel, A Fold in the Tent of the Sky by Michael Hale. He's the guy who will be leading the writing workshop I will be attending in the New Year. I like the story and the character development. He wanders the banks of the good ol' stream of consciousness (which I dislike) and there are times when he dives right in and splashes around for pages on end with nary a verb to be seen. I know why he does it and it works to a degree but I'm of the school of thought that a sentence needs at minimum a noun and a verb. Period.

The lead up to Christmas was the usual hellish rush to get things done and put together before the joyous 25th descended like a hammerfall. With frayed nerves and tangled strings of lights everything came together as it always does in great part due to the unceasing efforts of my better half. She keeps it all focused and in line and even 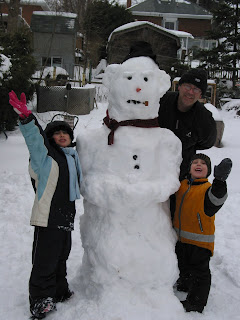 reminds me that it's supposed to be fun. Thanks, honey.

This year was a white Christmas, the whitest in years. On the 22nd, the weather grew mild enough that the Beynon family was able to give glorious birth to a bona fide person of snow (that's the term the Society for the Preservation of Persons of Snow would prefer you to use) right there in the side yard. He was tall and handsome and stood about six feet tall. That's him over there with your's truly, and the wee chilluns. The following day, unfortunately, it rained. Our sweet person of snow leaned forward and eventually, horrifically, his head tumbled to the ground. My son tells everyone with glee, "We have a headless snowman in our yard!" Forgive his political incorrectness, he's only four. Today, another mild day, I gathered his teeth, his carrot nose, his pipe, buttons and scarf. His eyes are buried somewhere and his hat is frozen to the ground. If tomorrow is mild, and the good people at the Weather Network say "yea", I will attempt to rebuild him, better than he was before.

Santa was good to everyone. I had a very Cormack McCarthy Christmas. I have heard recently from a few sources that I trust that he's an author well worth reading. The family got me his first book (somehow it got mysteriously ordered at our local bookstore just in time for Christmas), The Orchard Keeper. I also received The Road and No Country for Old Men. I've started with the Orchard Keeper and am really enjoying it so far.

Well, it's getting late and I need to be getting on to other things. A belated Happy Christmas to all and I'll leave you with this image of my 69 year old neighbour to remind us all what the holidays are really all about. 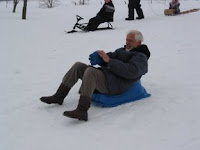 Merry Christmas to all and the Best of the Holidays - I'll be back before the New Year with another post.
Posted by Dave Beynon at 18:46 No comments: