It's been a rough old day here at the Beynon homestead.

It started last night with a puking boy who has, I'm happy to say, made a speedy recovery and by bedtime looks much better. Even in the height of a massive hurl he would look up from the tupperware container he has dubbed his "puke bucket", wipe his chin and say in an almost cheerful voice, "Wow, Dad, that sure was a lot of puke wasn't it? I think that hunk is banana..." What a trooper. A good night's sleep and he'll be right as rain.

The other part of the rough day is much, much sadder.

Seventeen years ago when I moved in with my wife-to-be she had two cats. One was grey and white and hated me. His name is Duffer and he did not like that I had taken over the role as alpha male in the house. Immediately after moving in he systematically pissed on everything I owned, paying particular attention to a comfortable chair that eventually needed to be thrown out, so impregnated was the odour of his rank urine. Over the years DUffer mellowed and he and I are now good friends. I mentioned that my wife had two cats.

The second cat was Jesse. He was this big, fat orange cat that she had adopted from another family. He and I were instant friends. From my first night in the apartment he was sleeping on me. He would constantly find my lap, regardless if there was a newspaper, a book or a plate of Chinese food on it at the time.

He was always more of a dog than a cat. He would come when he was called. He used to greet me at the door when I got home from work. He would even chase little foil balls made from cigarette packs and bring them back for me to throw again.

Over the years he has been a constant fixture in the Beynon household. He always liked women but I was just about the only man he was ever really fond of. He actually liked to attack my brother in law and my friend Bruce should they get too close or walk past one of his hiding places.

Well, old Jesse was exactly that...old. Our best guess is that he was 22 years old - a ripe old man of a cat. In recent weeks and months he'd been losing weight and vigour and this weekend a decision needed to be made. This weekend Jesse stopped eating.

At one time this cat tipped the scales at over 20lbs but recently he felt lighter than a towel. After moments of weakness where he couldn't stand and his refusal to eat over the weekend we made the decision this morning to take him to the vet.

I placed him on the passenger seat next to me and as I began the 5 minute drive he climbed over to be on my lap. As he sat there he looked around to see the world as it passed him through the driver's window.

I have nothing but good things to say about the folks at Wellington Veterinary Services. I was holding up pretty well until I actually had to verbalize the reason for my visit. They were kind and gentle. Jesse hissed and growled (he had got into the habit of hissing and growling at strangers for good measure in recent years anyway) as they gave him the IV but he calmed as I petted and held him.

I told the vet that I was raised on a farm and that farm kids aren't supposed to be emotionally attached to animals. She said it doesn't matter. She's seen bikers in tears over sick kittens and miserable old men distraught over the loss of a dog.

One of the strangest parts of the whole affair was when it came time to take Jesse home. The doctor returned to the room with a dark blue corrugated paper coffin. I recognized it immediately. It was the same "kitty coffin" I had sold at one of my previous jobs to Gateway Pet Memorials in Guelph. Strange that my own cat would end up in something I took a hand in designing and selling several years ago.

We had a short service in the backyard this evening and tomorrow a tree will be planted over Jesse's grave. I don't know it this is a Welsh tradition or just something my dad used to do but whenever a beloved pet would die when I was growing up a tree or shrub would always be planted to mark the spot. It's a lovely tradition and what more fitting tribute to my old friend than a living monument that will grow with each season. We should all find as nice a headstone as a tree. 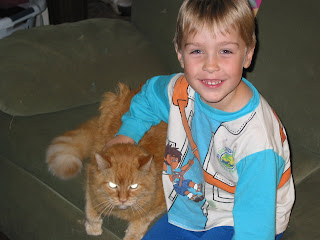 Goodbye you silly old cat.
Posted by Dave Beynon at 19:18 No comments: