Let's talk about poetry and hymns.

A short, winding drive from Pendine, where my dad grew up, is Laugharne.  Laugharne was the home of Dylan Thomas, thought to be Wales' premiere poet.  Since we were so close, I asked my cousin if he knew where the grave site was.  He said he did.

"It's in the churchyard where my parents were married," he told me.  We drove the handful of miles to Laugharne and parked at the church. 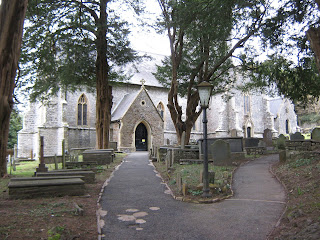 As we crossed to the newer part of the graveyard (ie graves no more that a few hundred years old) we passed by this grave. 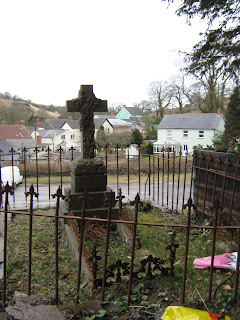 I told my kids that this grave belong to Wales' shortest vampire, hence the low fence to keep him from running free at night.

Once in the newer part of the churchyard I immediately spotted this elegant cross. 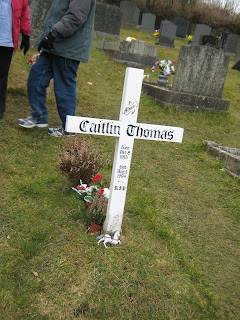 Caitlin Thomas was Dylan Thomas' wife so I assumed his grave would be near hers, but I could see nothing with his name on it.  My cousin's wife solved the mystery.  This is the same cross seen from the opposite side. 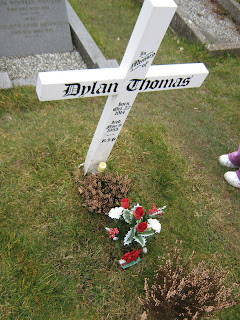 It's a custom in Wales (perhaps all of Britain) for married couples to be buried in the same grave.  This might be a matter of space or finances, but the romantic in me likes to think that spending an eternity like that is a little more intimate than side by side.  Note the items left on both graves from well wishers.

Our next trip, while we were in Laugharne (gotta love any place with Laugh right in the name), was to see where Dylan Thomas did his writing.

Here is the boat house where Dylan Thomas lived with his family, 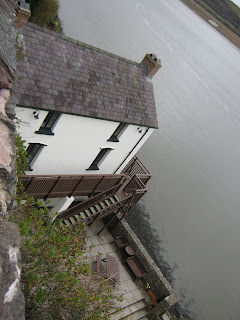 but this isn't where he did his writing.

Up on the cliff where this photo was taken is the original garage for this house.  Thomas converted the garage into his famous Writing Shed.  Here's the exterior. 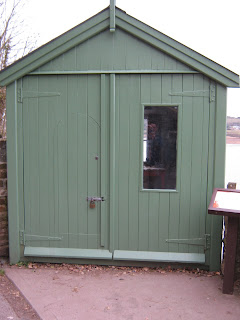 And here, with the reflected image of the photographer, is the interior. 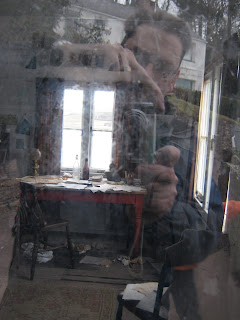 A very simple, yet private place to write.

I said there was a family connection to Mr. Thomas, and there is.  My grandmother used to take the bus from Pendine to Camarthen.  The bus stopped in Laugharne and my grandmother often found herself sitting next to Dylan Thomas.  A few years later when my grandmother was driving her car to Camarthen she happened upon a man walking along in the rain.  She slowed down and recognized him as that nice writer man from the bus.  She, of course, gave her country's greatest living poet a lift. 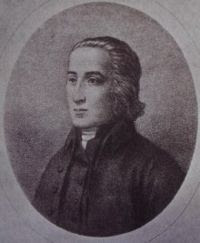 This guy wrote over 800 hymns over his lifetime but is best remembered as the gent who supplied the words for "Cwn Rhondda", the Welsh Rugby Hymn.

Our trip to Britain is mostly documented - there's still a little left to tell, but other writing awaits...
Posted by Dave Beynon at 12:51 No comments:

Wales boasts a remarkable landscape and it was in this setting that my father grew up.  One of the things I wanted to do during our UK visit was to make a connection to the land that my dad called home.

My father grew up in Pembrokeshire - the south-western tip of Wales.  The hills there are not the mountains of northern Wales, but they're pretty damn serious hills.

This is taken from a hill overlooking Dinas, the village where my cousin and his wife live. 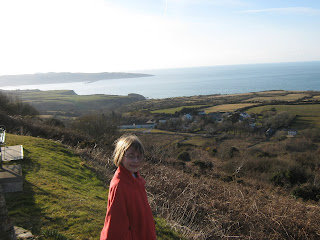 Although Dinas is on the northern coast of Pembrokeshire and my dad grew up on the southern coast, this picture and the next give you an idea of the rugged beauty of the place.  This is the beach that lies at the bottom of the hill my cousin's house sits on.  It's about a ten minute walk... 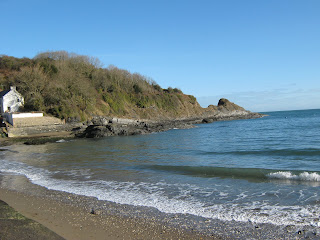 About a ten minute drive a little to the south of Dinas lies the Pentre Ifan Burial Chamber.  These standing stones have been there for over 6,000 years.  The top stone is reported as weighing over 16 tons and is balanced on the tips of 3 uprights. 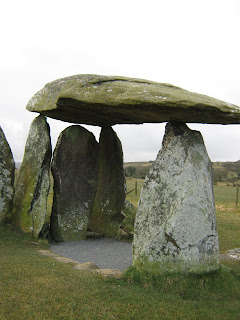 The large stone in the middle - the portal stone - does not make contact with the cap stone.  This site stands on an unassuming hilltop, surrounded by fields of sheep.

But we have to head south to get the my father's haunts.

My dad grew up in a place called Pendine and my childhood was filled with tales of this place.  I heard the stories so often that I felt I'd know the place as soon as I saw it.  We drove into the village and parked at the lot for the Museum of Speed - which was closed for the season.  When it is open it has motorcycles and cars on display which have broken world speed records on Pendine's seven miles of compacted sand beach. 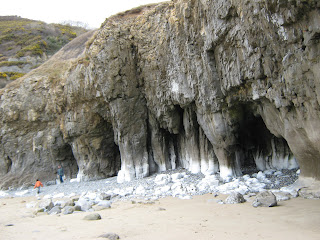 When they were kids, my aunt and dad were in a movie filmed in Pendine called, Pandora and the Flying Dutchman.  My dad and aunt are apparently in the crowd shots as the car races down the beach (along with just about everyone else in town).

Along the beach are caves.  My dad was an avid spelunker as a kid and, according to my aunt, much of it was without my grandmother's knowledge.  These little caves along the beach are not the one that my dad spoke of. 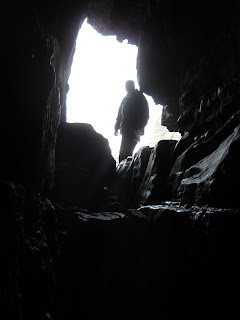 Apparently the deep and dangerous caves are higher on the cliffs. 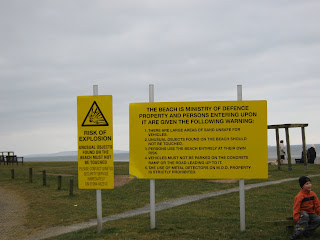 Doesn't that sign have "Exciting Childhood" written all over it?  Running along the beach are miles of sand dunes that the British Ministry of Defense thought was a good place to use as a testing ground for heavy guns.  Since it was forbidden, my father and his friends would, of course, wiggle under the fences and play hide and seek in the bombed out tanks and vehicles.

My parents actually got married in Pendine and it was a quest of mine to find the church while we were there. In old black and white photos of my parents' wedding day there was a white arch with lettering on it.  My cousin took me to two churches.  One was actually high above the town.  I knew right away it wasn't the right church but they did have the most elegant cenotaph I've ever seen. 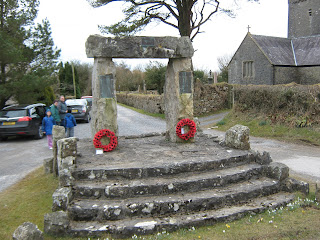 In the village was the church I was looking for.  Here it is with the kids standing in the archway. 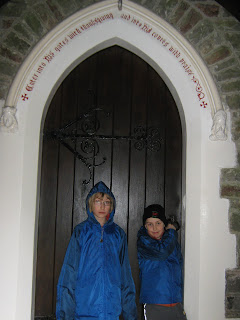 It was a very special moment for me to see my kids standing in the place where married life for my parents began.

Just down the road from Pendine is the town of Laugharne.  Laugharne is home to Wales' greatest poet and there's a Beynon family connection here...but it'll have to wait until next time.
Posted by Dave Beynon at 13:43 No comments: