It has been over a month since the last blog entry and what a busy month it has been.  There’s lots of news so let’s jump right in…

First, there was a sale.  My short story PACT has been purchased (I use that term in the loosest sense.  No money has changed hands) and will be published in an upcoming issue of Sherlock Holmes Mystery Magazine (should be # 11, I’m told), but not for about eight months. 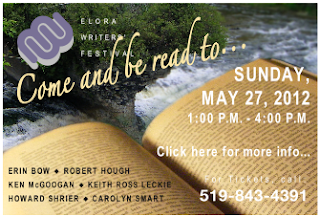 I was asked to join the committee for The Elora Writer’s Festival.  I was interviewed on our local cable station’s show, Over the Fence, to spread the word about this year’s line-up. You can check out the line-up by following this link. This year’s festival takes place on May 27th.  If you can make it, join us for a day of readings.

I’ve been working on , fleshing it out to novel length.

There was a review of Evolve Two and Symbiosis was again favourably reviewed.  Peter Tennant for the UK's Black Static Magazine had this to say about my story:

"This section of the book closes with the emotive‘Symbiosis’ by David Beynon, a sad and lonely man coming to an agreement with a hungry vampire, each attempting to give the other what he needs most, the story character driven and with a bitter sadness and compassion underneath the text."


And then there’s the BIG project.   Remember a while back when I posted a couple of sketches of a garage/office concept?  Well, the concept is beginning to take shape: 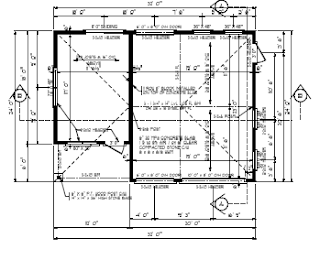 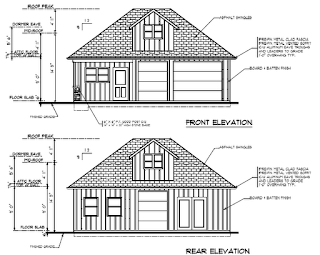 And not just on paper: 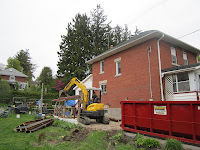 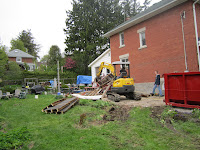 First the carport needed to come down.  I tore off the sides, stripped the shingles and unhooked the electrical.  It took me a week. The contractor came in with his little yellow digger and had the rest of it down in a couple of hours.  I'm convinced I must have loosened all the nails... 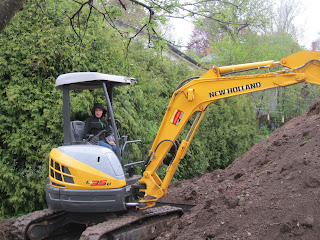 It was an impressive little machine, as my son will attest.

Next a base of gravel was applied by a marvel of technology - the Stone Slinger. 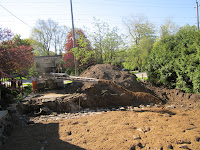