What's the plural of "synopsis"?

I know the answer is "synopses", but it just seems like it should have an octopus or hippopotamus-like plural somehow.

That's what I should be doing right now.  It's what I was doing before I convinced myself I needed a break from working on the synopsis for The Edgeling.

But I did need a break.

One last look at Britain, then back to work...

After spending time in Wales we returned to Copthorne Bank, just south of London.  During our last few days in England we went here: 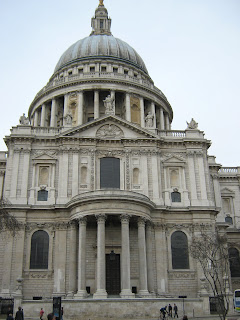 That's St. Paul's.  We climbed the stairs to the Whispering Galley and yes, I could hear my kids whispering to me from the other side of the dome.  We went to the vault and saw Nelson's Tomb and discovered that while Westminster Abby has a Poet's Corner, St. Paul's has an Artist's Corner (more of an Artist's Wing, actually).

We crossed over the Thames on the Millennium Bridge and headed toward this imposing structure: 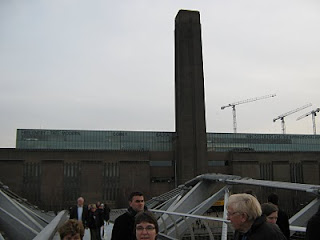 It's hard to get the scale from this picture.  This is a decommissioned coal-powered generating station which has found wonderful re-use as the Tate Modern Art Gallery.  What a treat is was to show the kids Warhol, Lichtenstein, Picasso, Dali and more, up close and personal.

I have to admit that there was one piece that had me confused.   I unfortunately couldn't get a picture.  There were three upright Hoover Vacuum Cleaners standing side by side with an acrylic platform over them on which stood a single industrial wet-vac.  The piece was lit from both bottom and top.  The acrylic did interesting things with the light and the surfaces of the vacuums.  Was it art?  Some people thought so.

I thought it sucked.

After the Tate Modern we went a little way down the block to this place: 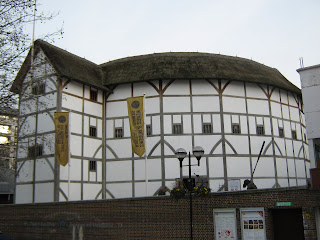 What trip to London would be complete without a trip to the recreated Globe Theatre.

This concludes our trip to the UK.  Now, back to work for me.
Posted by Dave Beynon at 10:55 No comments: